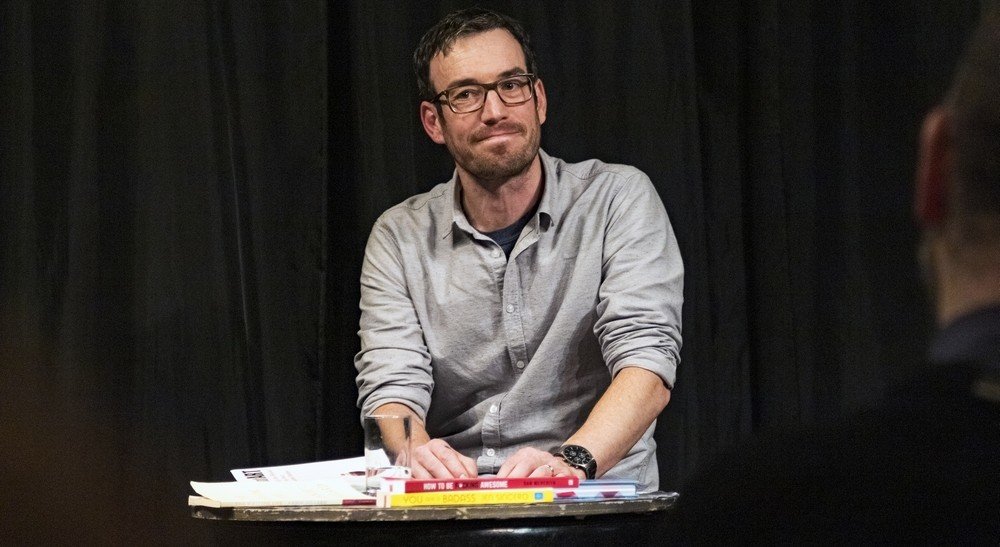 Ever Better, a one-man show by Ryan Millar. Photo by Robin Straaijer

A year-end review is a good thing to do. Not necessarily because it makes good reading (although if you happen to be reading this, thanks! I hope it’s interesting/useful/surprising/life-affirming/hilarious). Take stock of what’s happened, and glean some insight from your past to help you guide the future.

So here are a few highlights from 2018, the year just past.

First and foremost, publishing TAKE IT EASY – that means the actual mailing, the listing on Amazon and everything else. Now, with a bit of distance, I can look back and feel like, hey, this actually turned out pretty well. There are plenty of people to thank for helping me get that done, and if you buy the book on Amazon, they’re all named inside. Or you can also listen to this dope-ass rap song.

In May the whole Amsterdam Millar clan took a trip to the west coast. From San Francisco to Portland to Bend to Vancouver and Victoria we gallivanted around with Arya and she was a travel legend, totally able to handle her business. It was great to have so much family hanging and whatnot.

For most of May and June, Chiara, Arya and I wandered through the west coast of California, Oregon, and BC. It was an action-packed adventure that defies easy summary. But I’ll say I did: co-facilitate a two-day corporate retreat in Bend Oregon, go camping in Yosemite, lay down some freestyle raps in my niece’s elementary school class, and see lots of wonderful friends and family.

So it was a type of perfect, basically.

But the biggest revelation was that Arya was relatively well-behaved on the 10+-hour flight there and back (about an 8.5 out of 10).

I hear that a flight with kids is different every time, like a fortune cookie. But getting one success out of the way early was very encouraging. She was also good on the train, in the car, on the other flights and on the bus.

Comedy institution Boom Chicago, my former employer, had a big 25th anniversary alumni weekend, to which I was invited to all the events. Plus, that weekend Chiara and Arya were going to Rome for a wedding.

So for that weekend, I soaked up plenty of alumni activities and had a blast. I saw lots of old familiar faces, a few famous ones and enjoying plenty of freewheeling, bachelor-style freedom.

And it all culminated with the show at Carré on the Saturday night. Sure I was one of about 60 people on stage, and I only had one moment (which, to be fair, I made the most of – getting a nice big theater-sized laugh/indignant outrage on a relatively edgy joke).

That was a cool thing to experience, but in fact the real highlight was just enjoying all of the good times, and a dynamite afterparty on Saturday night. Easily, a highlight of the year.

Plus, the next day was the World Cup final. So yeah, it was a helluva good weekend.

Launching Ever Better, a solo show

In November I managed to perform a whole new storytelling show. That feels good. There’s definitely some more development work to be done, but I’ve got some ideas for how to make that happen for next year.

On 6 November 2018, I did the very first public performance of a brand-new storytelling show called Ever Better. This show was a collection of true stories, drawn from childhood through my teenage years into early adulthood. All stories of mistakes, mishaps, fuck-ups, and general foolishness, juxtaposed against my habit of reading self-improvement books.

What can I say? I may be getting Ever Better but I’m also still a highly imperfect work in progress. My imperfection endures. Read more about it, if you’d like. 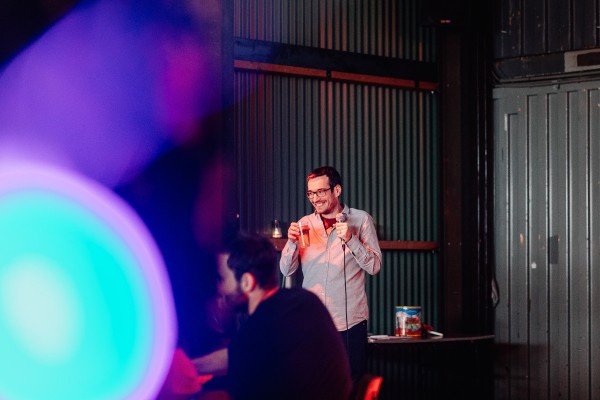 Hosting a pub quiz, one of my last official acts at Tiqets

New job as a Chief Editor

In September I got a new job. I left the startup life after three years in the role. It was fun, it was a great step, I learned a lot and delivered a ton of value and made some cool stuff happen, but then ultimately it was time to go. And I slipped out of that into a new job at Signify, formerly Philips Lighting.

It’s not quite on the same level as adding two extra months to a year, but I’ve had a change in my schedule recently. I’m now eight weeks into a brand-new job. And it feels pretty good.

At the end of September, I left my old job at the startup Tiqets to take a role as Chief Editor at Signify. Moving from a company of about 100 people to one of approximately 30,000 was a big shift. Apparently, my background as an iconoclastic rabble-rousing performer and wiseacre endeared me to them. And so far it’s been a nice mix of writing, training and new ideas.

In fact, my very first day of employment there involved my training a section of the HR department on the Signify writing style — before I’d even written a word for them! That’s the kind of strange beginning I like.

The takeaway here is: so far, so good.

This was a little sideways cheeky bit of something, but I happened to get invited to be a speaker coach for TEDx Amsterdam, and that was a really cool experience. I loved attending – even for only half the day, and worked with the Excellent Jorge Manos Garcia and helped him put a few touches on what was already an excellent presentation.

I’ve watched many TEDTalks before, and reference them often when I teach public speaking. But my first actual TED attendance was in November. About a month prior I bumped into an old acquaintance, who invited me to be a speaker coach. I said yes and had a couple of great sessions with a Senior TED Fellow who was giving a talk about temples on the moon.

It was a super-cool talk, though it’s not online as he’s hoping to present it at another upcoming TED event. But I enjoyed the time beforehand and of course the day itself was thought-provoking and inspiring. Very on-brand.

Heating up at hot yoga

In 2017 I started doing hot yoga. Largely on the strength of the hot yoga studio fulfilling two key criteria: It’s just a couple blocks from my house, and they run multiple classes every day of the week. But that year my ten class pass (valid for one year) expired when I’d only done nine classes. That means that I did yoga almost ten times in the year. Not really a hobby. And definitely not a fitness regime.

In 2018 I ripped through two of those passes! (I recognize that’s not really a huge accomplishment, and in fact it works out to a class a little less often than once a fortnight. But it’s more than 100% improvement. And it shows I’m building a habit. Year on year. That’s something that can only be seen by doing these year-end reviews.