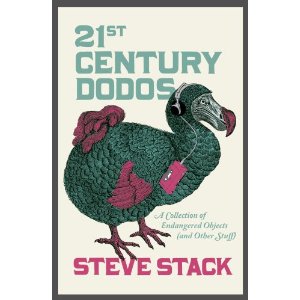 There’s a book just out called 21st Century Dodos. It’s about stuff (and other things) that have gone extinct. I often find myself thinking, now that I’m old enough to reminisce, about driving to 7-11 on a Saturday night to see who’s there, because there was no other way of knowing, or staying home on a Thursday evening so I wouldn’t miss my favourite TV shows. You know, nostalgia for hallmarks of my bygone era. So the book sounded like my kind of thing.Then I found out, via the author’s twitter feed, that he was doing a blog tour, so I invited him here to London Mewsings. He agreed, and fit me in between Writers Little Helper and My Little Notepad. He also sent me a copy of the book, and I have to say it’s great – not only because he sent me a signed copy, though that certainly was awesome. So I turn it over to Steve Pack. Greetings one and all.Thanks to Ryan for allowing me to gatecrash his blog today. Is it gatecrashing if you have permission? Probably not. Anyway, it is nice to be here.It isn’t just a social call though, I have come along to plug my new book, 21st Century Dodos. It is a collection of (sometimes) humorous articles about inanimate objects. Specifically, the sort of objects that surrounded many of us when we were younger but which are now finding themselves on the scrapheap due to the relentless march of progress. You know the sort of thing: VHS tapes, 10p mix-up bags, that clock that used to count down to the start of schools programmes on BBC2. All of these and over a hundred more are celebrated and commemorated in the book. I suspect it is destined for toilet libraries rather than reference libraries, but I am OK with that.Here is a sneak preview of one of the more obscure entries, something that many of you may not recall at all. But I bet some of you do. Election Vans with LoudspeakersBefore the days of 24-hour news channels, Twitter, and all things internet-related, politicians had to really put in some graft if they wanted to be elected. There was the door-to-door canvassing, the kissing of babies, and driving around in a van that had a loudspeaker on the roof. It sounds daft now, if you have never seen such a thing, but it was standard procedure at the time. Seriously.A big speaker or loudhailer would be strapped to the roof of an available vehicle, and the prospective MP would be driven around town while trying to convince people to vote for him or her. Usually this involved inspired and unforgettable rhetoric, such as, ‘Vote for Peter Jones, I’m the man for you’ or some such nonsense.It was like the ice cream van of your nightmares.Usually the arrival of said van would be greeted by jeers from builders hanging off scaffolding (if it was a Tory candidate) or a disapproving look from posh women in headscarves (if Labour). I presume it must have had some effect, though, as politicians did it for years.Now they just poke you on Facebook or something. *** Amazon link . Or go here if you like them newfangled Kindles . And thanks Steve, it was a pleasure having you.