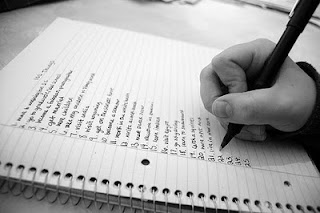 As part of the Hundred Days project I’m making lists – at least for this ten day stretch (Day 30-40). This is, of course, in addition to all the press ups and sit ups.

The listing project was inspired by Elise in Brighton. She’s doing some amazing lists. Instead of trying to get too much in on that and cramp her style, I decided in large to just highlight lists that I like.

This is because I find making clever, interesting, funny, thoughtful lists very time-consuming, and I’m on holiday. Also, I’m already doing lots of pressups and situps (35 of both today).

Anyway, just to catch up on the first five lists:

Day 31: Month names of the French Revolution calendar. This list is interesting on its own, plus it’s new year’s relevant. I also wonder now if my fascination with it has anything to do with the fact that during this project, my own calendar is shifted into a base 10 system…

Day 32: For New Year’s Day – which is always full of resolutions – this list, from Salon magazine. It’s important to read and take to heart if you’re a creative type and thinking about packing in all your bad habits. The Seven Vices of Highly Creative People. That’s right. Vices.

Day 33: A short list of things I’ve forgotten:
1. My great idea for my list today. I had it in my mind on my way back from buying some produce, but now it’s gone.
2. To get tickets for the Pajama Men show: I really want to see this – these guys are awesome.
3. My notebook on the train. Unbelievably this was the second time I’ve done this. Only this time I also forgot a library book. It had a year’s worth of scribblings, ideas, doodles, as well as my haikus and list ideas. I’m trying not to be too angry and upset about this. Maybe 2010 is about letting go, I guess. I hope the library agrees.

Day 34: In honour of the improv audition I had today I present a list of the worst audience suggestions one can get.

Day 35: my favourite animal grouping names. Pack of wolves, school of fish, and pride of lions are all pretty good, but there’s so much more goodness out there.

I know ‘murder of crows’ is pretty well-known, but it’s also fucking awesome. As is the slightly less menacing ‘unkindness of ravens’, which probably should’ve made the list. More animal group names here and there.

That’s the first 5 lists. Also, take note that I’m not the only one trying on other projects. But where I call it ‘touring’, Lizzie Poulton calls it ‘plagiarism‘.

This week she’s doing a collapse of press ups!