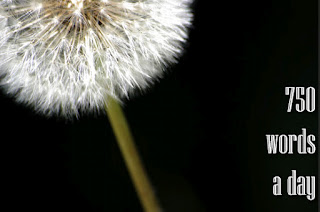 It sounds easy, and perhaps pointless, but I’ve found it to be a useful way to write, and a great place for me to keep that writing. I’ve been using it a lot lately. Almost every day, in fact.

On the homepage it says “The idea is that if you can get in the habit of writing three pages a day, that it will help clear your mind and get the ideas flowing for the rest of the day.”

When started in the spring, I initially struggled to get to 750 words of purposeless meandering; I’d leave posts half completed, or skip days. But now, 140 days and more than 113,000 words later, I’ve gotten the hang of it.

The idea is that you write the nonsense stream-of-consciousness stuff to clear out your headcave so you can get stuck into whatever else you need to do, creatively or otherwise. For me, that’s writing the other stuff I need to write, for work and side projects. Getting a bunch of stuff out is a great way to start.

As Buster Benson, the guy who created and runs the site, says, “This is writing, and it’s online, but it’s not blogging, or Twittering, or Facebook status updating. This is between you and you.” Which is how I use the site – as well as enjoying the little perks such as badges for completing sets of days and the text analysis functions.

But I also use it to get ideas down. I’ve taken to improvising stories during the time, or will start writing with an idea that might one day develop into a sketch or short story or comedy bit. This seems in line with the idea behind the site. But I also use it as a straight-up productivity tool.

I’ve first-drafted emails, feature articles, blogposts (this one, for example), work reports, and all manner of things on the site. So, though much of the stuff I write on 750 words stays in an unformed typo-ridden state, many pieces turn out to be a first draft of some sort.

E.B. White said “the best writing is rewriting”, and he was absolutely correct: a first draft is nothing really, and it is never a final draft. But you can’t start rewriting until you write.

Start with 750 words a day and see where it takes you.