A mugful of words to live by 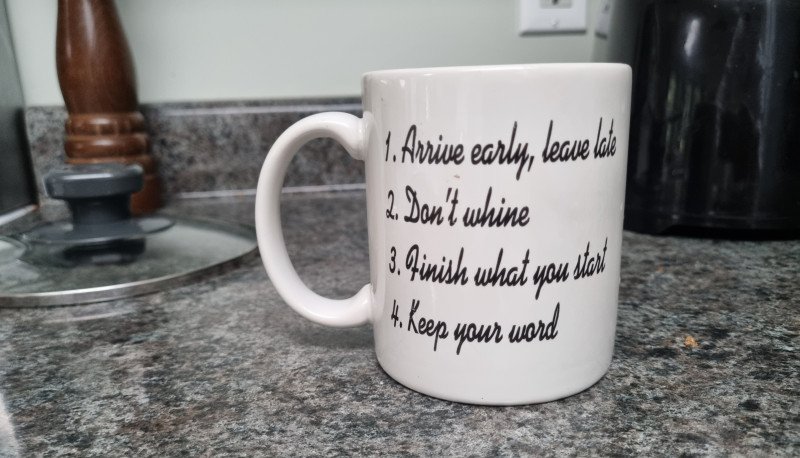 I just spent a big chunk of time back in Canada, visiting family and generally digging my roots back into the soil.

While there, my mom gave me an old mug of mine she’d clearly been holding onto. Almost thirty years, according to the calendar. The vessel was a gift from my amazing high school drama teacher Mrs. Beaven to the cast and crew of our production The Canterbury Tales.

And as a memento, we all got these mugs. On one side is a picture of a bunch of high school students acting out a scene from The Miller’s Tale. On the other: Four pieces of good advice that serve to remind us where success comes from. Or how to be a good person.

I’m gonna run through those pieces of advice, and check in on how present me is doing in living, laughing, loving those ideals.

This is timeless advice. I’ve recently been revisiting my approach to scheduling, as I can cut my margins pretty fine. That can make me late or right on time, but rarely early. So, of late I’ve been pushing back in order to ensure that each activity gets enough time and focus. And I arrive less stressed.

But actually, the arrive early part is pretty straightforward. The second half is equally important though. And I don’t mean this in the 70-hour-workweek-climb-the-corporate-ladder sense. That sucks. Leave late in the sense of give-your-actions-a-complete-focus. And make sure to savor it completely. Stay for the credits of the movie. Go for a beer after your improv workshop. Make time for a walk after lunch with a friend. Etc.
CURRENT STATUS: In progress, on both halves.

I’ve been telling this to my kids a lot lately. Where do they learn the whiny tone of voice? It’s amazing that they can pick it up so effectively. Anyway, whining sucks. And, as my friend Jim Libby once told me, “If you can’t get out of it, get into it.” Words to live by.
CURRENT STATUS: I’m doing okay at this. I’m pretty optimistic and upbeat by nature. But it’s not perfect. It doesn’t hurt to be reminded that sucking it up and getting down to business is always an option.

Finish what you start

I’ve just started reading Essentialism, by Greg McKeown. It points out that doing many things means you don’t make great progress in any one area. As a generalist by nature, and an enthusiast, and someone who works variously as an actor, a life coach, a speaker trainer, a workshop facilitator, a comedian and event host, a business writer and a podcaster and rapper. Well, this is an area where I have room for improvement.
CURRENT STATUS: Lots of learning for me here. The path to success lies through doing less better, as McKeown writes.

I don’t think I’m particularly bad at keeping my word, but I’ve definitely agreed to things far in advance thinking “I can make time for this”, and then realized closer to the date that I was over-optimistic. If I tell you I’ll pick you up at the airport or take a piece of work I’ll make it happen, but the other plans have a less-stellar hit rate.
CURRENT STATUS: Room for improvement. 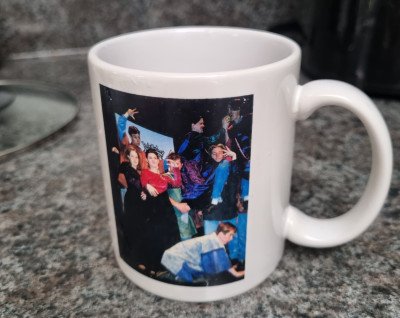 So, not bad overall. But if I’d just followed the mug’s advice in the first place things would be better off. Thanks, mug, and thanks Mrs. Beaven for the mug and dramatic inspiration.

In the end, I didn’t keep the mug. We sent some stuff to the thrift shop after our month in Canada. I was tempted to bring it home, but I realized that it was like Dumbo’s feather.

I didn’t and I don’t need the mug, but I do need to remember its lessons. That’s what this blogpost is for.