A Visit to Edinburgh 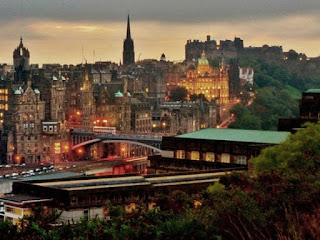 I’m not sure how much of this warm feeling has to do with the fact that we were ‘on holiday’, but damn is Edinburgh a nice place to be.

We stayed just off Broughton Street, right in downtown, and around the corner from Urban Angel. We went there for dessert on Friday, and it was so good we went back for breakfast the next morning.

Chiara kept trying to convince me to go back again – her soymilk rooibos cappuccino was something of a revelation.

I myself preferred the Artisan Roast for coffee.

Post-coffee, with wife asleep, I managed a short solo sojourn up Calton Hill, and the next day, down to the Scottish Parliament, and of course, see the Castle.

It was all very Scotch, and surprisingly French. Until we learned of the Six Nations Rugby Match that weekend. But the crowds of French rugby fans all over the city did little to dissuade us of the awesomeness of the town. The rain seemed romantic, as did the Scottish imperviousness to foul weather.

I love pubs. Chiara, not so much. But we managed to find, and dine, and drink in two lovely ones on the shore in Leith. In one day! The King’s Wark for drinks (where Chiara warmed her back on the fire) and I watched her warmth, and glance over her contented shoulder and see the glowing embers. I also enjoyed a dark delicious Caledonian ale.

Then we went to the bar up the street called The Shore. Dinner was delicious, and Chiara could again warm her back on the fire. A second perfect evening in a row.

I also managed to make my way to The Scotch Whisky Experience, which was, I think, important.

As a whisky experience goes, it was suprisingly enjoyable, impressively educational, and remarkably immersive. Climbing into a big whisky barrel and being led through the whisky production process by a projected ghost with a potent burr could be hit or miss, but for me, it was pretty fucking hit. The stretch where I went through the yeast was the best, although the cooling copper tubes were pretty great.

Between that barrel of good times, the tour of Scotland’s whisky regions, and the whisky tasting session, I now feel qualified to project the insufferable air of the whisky dilettante.

But hey, I also got to see the world’s largest collection of whiskies (3,384, if memory serves) so I think I know what I’m talking about. Plus I got a commemorative tasting glass.

A smoky peat-fired after-dinner tipple, anyone?

I saw snazzy kilts, buses with no rear exit door, drivers who interpret a flashing green walk signal as a cue to accelerate through the pedestrian crossings, and castles shrouded in mystery, history and fog.

Despite the hazardous traffic, the whole place projected a warm homey vibe. With tonnes of good veggie food, pub fare, and ales and whisky (and tales and whimsy) aplenty.

It was over too soon.

I sure hope to be back. For more strolls, fireside meals, and perhaps some Edinburgh Festival Fringe. My efforts to get myself to that fest recently doubled. And now, even more recently, redoubled.

Low note: I passed up an opportunity to have veggie haggis with whisky sauce and mash, at a beachside pub. Why? I have no idea.

But I will right that wrong on my next excursion, this I assure you. The joys of movement A visit to a Turkish bath October and its adventures