And more tips for the dedicated improviser

TAKE IT EASY™ isn’t about a new way of doing improv, nor is it meant to replace your own style or approach. Instead it’s a mindset that can inform your performance and approach to improvisation.

“Highly recommended for the beginning improvisor or the seasoned pro trying to rediscover the fun.” – Sam Super, The Second City Training Center’s 2017 Teacher of the Year 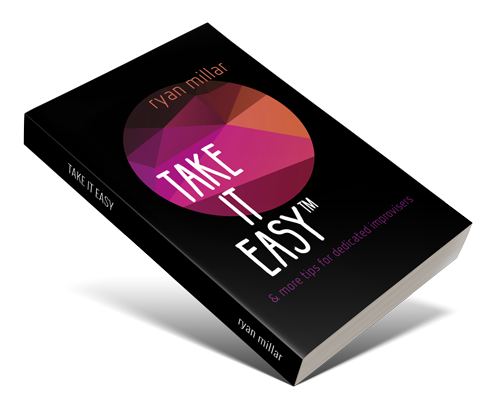 This isn’t an ‘intro to improv’ book, nor is it a how-to manual. Instead, TAKE IT EASY™ is a collection of thoughts and observations designed to give people a different perspective on their craft, and it also includes games and exercises for people to do on their own or to bring to their group to reinforce the book’s teachings.

A lot of those exercises can also be enjoyed by the non-improviser too.

One of the crowdfunding perks was getting their name in a rap video. Here’s that rap video, all about gratitude.

Ryan Millar is an Amsterdam-based improviser, actor, and writer. He started improvising in Vancouver in the late 90s. Since then he’s worked with, taught, learned, and performed improv around North America and Europe.

Highlights include working as a trainer and referee for the venerable Canadian Improv Games, working with Amsterdam’s comedy institution Boom Chicago, teaching at Impro Hotel in Corfu, performing in various shows (improvised and otherwise), at the Edinburgh Fringe, hosting talk shows The Yak in London, and The Big Ideas Show in Amsterdam, and doing two-man improvised longform hip-hop shows as Milly Can Rap with Trent Pancy.

As a performer and communications trainer, Ryan has worked with clients including Apple, DG MARKT of the European Commission, Google, Virgin Media, Toastmasters, Greenpeace, and Deutsche Bank (among others). He’s on the faculty of Guardian Masterclasses, running regular sell-out courses called ‘Learning to Love Public Speaking and Presenting’.
He holds an MA in Professional Writing from London Metropolitan University and a BA in Communications from Simon Fraser University in Vancouver, Canada – where he’s from.