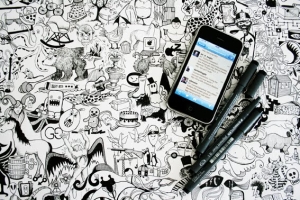 I arrived at Fringe Central early – at around nine, as has become my custom. I was seated, coffee in one hand, stapler in the other, with a two sheets-worth of glowing reviews of Roman Around printed out on fortune cookie fortune-sized strips of paper, and a stack of flyers on the table in front of me.

While having your flyer adorned with bold pullquotes and five star reviews is preferable, if you’d already printed your flyers before the (three and four star) compliments came in, it is apparently accepted practice to just staple them to your flyers. I was not about to hide the nice things that have been said, and there’s a meditative quality to the rhythmic papercutting and stapling that’s a nice way to start the day – productive and relaxing.

And then I witnessed, and was drawn into, something that upon reflection was pretty amazing – and somehow emblematic of the hustled flurry and random encounters of Fringe-ness. It was also hilariously awkward.

Fringe Central was busy, as it always is, with Fringe staff, producers, journalists, performers and all manner of folks in various stages of panic or hustle. As I sat down I noticed the smartly-dressed journalist, about my age, sitting two tables over. He always seemed to be at Fringe Central when I was there, working his laptop and his phone, lining up shows to see and emailing finished reviews to papers.

Not too far away on the other side of me was a middle-aged producer, sweat stains already creeping out from the armpits of his baby blue golf shirt. He too was working the phone lines. I sat stapling away on my stapler, letting their respective half-conversations flow around me – adding more sensory filling to my HOLY SHIT I’M AT THE EDINBURGH FRINGE experience.

After some minutes of overheard phone moments I realized that a single phone conversation being was formed from overheard snippets. Actually, it first entered my consciousness more subtly – their fractured halves aligning in what seemed like a remarkable coincidence.

“Hello,” the journalist answered his phone.
“Good morning,” I heard the producer say. I noticed the way the conversations seemed in sync, and then focused back on a tricky bit of stapling.
The voices then increased in volume, the journalist enunciating into his iPhone, “It’s kind difficult to hear you.”
From the producer, just to my right: “I’m sorry, is that better?” an edge creeping into his voice as he shifted in his seat.

By now, I had twigged that I was witnessing something special.

After a moment’s hesitation I stood up to inform the producer that the conversation he was having would be a lot easier if he put the phone down and addressed the gentleman sitting right in front of him. The producer though, confounded by the poor reception, was growing increasingly desperate. He had a reviewer on his hook and did Not. Want. To. Be. Distracted.

As I approached he made a studied attempt to look away and concentrate harder; he did everything but actually wave me away. I tapped him on the shoulder and waited. When he glanced up I pointed at the journalist the next table over. The journalist looked up. I said, loud enough for both to hear, “I think you guys are on the phone with one another.”

After jointly attempting to verify my claim over the phone, they hung up. Then they had an awkward conversation that I enjoyed as a background to my stapling, pleased that I had a personal stake in what was happening: not only had I facilitated a real-life Fringe Connection, I had been part of some bizarre alignment of circumstances and people that can only happen in Edinburgh, and only during the Fringe.