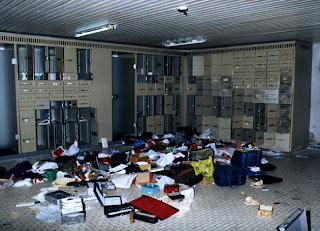 Unfuckingbelievably, the gang penetrated 10 levels of the highest security and made off with an estimated 100m worth of loot, which was never recovered. Link

Wired has a story on the February 2003 diamond heist in Antwerp, perpetrated by some slick Italians. Real-life Oceans 11 type stuff. Read it: it’s fascinating.

I read the piece a few days ago and thought: this would make an awesome movie. Then I thought: I should write a movie about it. Then I made a little note in my little black book.

Of course, just days later I learn that Paramount has already optioned the Wired story, and JJ Abrams (Alias, Lost…) will be producing.

Man. As if I needed to be reminded, again, of my complete lack of Hollywood clout. Despite the fact that I wrote the idea down in my black book, when those lawyers, movers, shakers, and power players got together around the table, I wasn’t even invited. Not even to the part afterwards where they went to have expensive cocktails, cocaine, and high-5s to celebrate the successful closure of the deal.

I really would’ve liked to be there, at that meeting in that L.A. skyscraper where all this went down, if just to remind them that I wrote, and produced, and starred in a little short film called ‘Flunky’.

Their ears would perk up, and they would stop trying to talk over me.

“Flunky? You say?” The no-nonsense studio head with a Midas touch would muse, looking inquisitively into my stunningly handsome and deeply pentetrating emerald green eyes.

“Yeah, why haven’t I seen that yet?” Wonders the high-powered, high-profile, Jewish agent aloud.

To which I would reply, while pushing my leather chair back from the glass conference table and folding my hands behind my head, “Well, it’s still in post-production.”

Needless to say, I think this delightful little tidbit would fucking floor them and stop them dead in their tracks. Then, I would be wined and fine dined around the City of Angeles, before finally consenting to put my movie writing skills – honed on such high-profile projects as ‘Flunky’ and the two page treatment I wrote as part of the application to Roehampton University’s Creative and Professional Writing Programme – to work crafting ‘The Untitled Antwerp Diamond Heist Project’.

The ongoing making of a film: Flunky

Flunky – photos from the shoot