Awesome: I Fuckin’ Watched That! 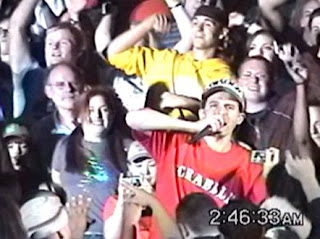 The Roma Cinema Fest is happening. It’s taking place at the Auditorium Parco della Musica, which is an amazing complex that usually offers little programming for my tastes, and little opportunity to explore it. But the Film Fest is on and I could go see any and all festival films I want. Right?

Wrong. The festival is essentially sold-out, and has been since the second day when I tried to get tickets.

Oh sure, you can get tickets for some mediocre films but not for the films you really want to see: the juicy filmfesty films that make these events worth getting excited about.

However, I did manage to get a couple tickets for a film that fit enough of my criteria, but not such a mainstream crossover fiom that all the tickets went, which is kinda surprising, because tickets for a Beastie Boys concert require one to be well on the ball.

Fortunately tickets for “Awesome: I Fuckin’ Shot That!” were available on the website and I hooked up a couple tix for me and my man Jason Carvey from LA who’s visiting. We rolled out Sunday Night to the movie. Once seated we got a surprise: Giovanotti was there to introduce it! Jovanotti is an Italian singer songwriter. He’s got a beard and wears sneakers with his suit. Cool enough, but I was only a little more excited than you are about him.

Next though he introduced MCA who came out in an untucked suit, grey hair and faceful of chewing gum to introduce the film he shot in collaboration with the elusive Nathaniel Hornblower.

The concept for I Fuckin’ Shot That is that cameras were given to 50 audience members who were instructed to do whatever they wanted at the Beastie Boys concert in Madison Square Gardens, just never stop filming.

The innovation of the shooting procedure doesn’t translate that well to film, with much footage being drawn from nicer cameras used by better camera ops, but still it’s there: fanshot concert footage, and it does bring one closer to the action.

Though the shooting was innovative and only made me a little nauseous at times (between jiggly camera work and jumpy editing during some songs) I wasn’t blown away by the images. The sound however, was awesome. The acoustics in the theatre were incredible and the sound system fuckin’ loud and clear.

Listening to, and watching a live Beastie Men concert while not as avant garde as I like in a film fest, appealed to the broader part of me that just likes a good time.

Afterwards after Yauch came to say his “Mille Grazies” I got the chance to shake his hand and say “thanks.” I hope he understood all the subtext; that the “thanks” was really for providing me with many a track on the soundtrack to my life and alot to look up to in my formative years.

Awesome I Fuckin’ Shot That was awesome if you’re a Beasties Fan, which means it should get some play, because who isn’t a Beasties fan?