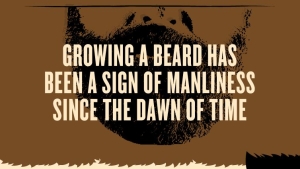 I don’t know if you’ve noticed, but lately I’ve been rocking a look that can be described as ‘seriously semi-bearded’. It may not be particularly luscious or full, but it is almost certainly a beard.
I started sporting it some Decembers past, after a particularly disappointing Movember.

And I’ve been thinking a lot about face hairs lately, as they seem to be more prevalent; even mustaches appear to be worn so ironically they’re sincere, or vice-versa. And even some sideburns of import have been cropping up too.

All of this, plus the regular duty to trim my own beard, keeps the concept of beardiness on the back-to-mid-front of my mind. And then, some weeks ago, I was contacted by one Peter Kim, a man who is part of a team that created an infographic on the history of beards, ostensibly for an online PhD in Facial Hair (no joke). It’s pretty great. And mighty informative.

So scroll down. Or visit the online PhD site to check it out on your own.