Back in 2003, I decided to apply for an Irish passport. I was going to be studying abroad in the Netherlands, and was informed that a European passport would smooth my navigation through the Dutch bureaucracy. Shortly thereafter, I picked up the application form from the Irish embassy. I called my dad to let him know the wheels were in motion.

At that point he reminded me that he was born in Northern Ireland. Which is part of Great Britain. Making him (and his offspring) eligible to be British citizens. Boy, did I feel dumb!

Especially when you factor in the gradually building awareness of the countless injustices visited upon Ireland and her people by Her Majesty’s Government. However, in terms of my approaching departure date, I corrected my course, got the documents in order and applied for, and received, a British passport.

Shortly thereafter I caught a plane to Amsterdam for what was supposed to be ten months of studying abroad. That was 15 years ago. All 15 of which I’ve lived as a British citizen (of course more Canadian than anything else), but with that handy little document giving me freedom of movement and ease of residency wherever I alighted.

And then Brexit came along. I mean, sort of.

My whole time here in Europe I’ve been Canadian/British. And it makes sense — my mom was born in Wales and my dad was born in Northern Ireland. And so part of my personal narrative has been about my Canadian upbringing and sense of self, framed by my British heritage, all as a way to construct my identity as a resident of Europe for the past 15 years.

However, all of that has changed. Turned out my dad was wrong: as part of the peace settlements, anyone born on the island of Ireland, and their descendants, are entitled to an Irish passport. That includes me. So I set about applying for one.

It came in the mail yesterday. So legally speaking I’m now Canadian, British and Irish. It was a small (though bureaucracy-intensive) step to get the passport, but with it has a strange sense of guilty pride mixed with curiosity and confusion.

I should point out that my father was born in Belfast — Northern Ireland. And his father, my grandfather, was an officer in the British paramilitary.

I don’t know details, but I’m certain that means that he wasn’t one of the good guys. I don’t know enough about the Troubles to comment in any in-depth way, and I know if they were a knot capable of being untied (or sliced through) that would’ve already happened. But let me go on record as saying that I’m generally not on the side of occupying powers. In fact, never. 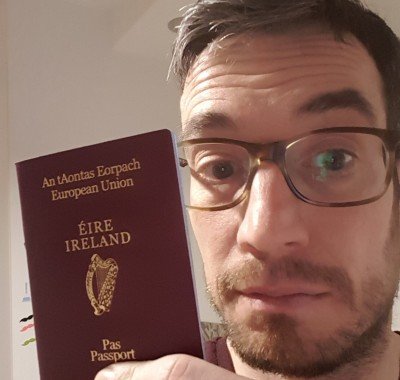 Of course, this new passport brings with it a whole set of confusing new parameters and uncomfortable questions, but it also brings with it a new relationship to my identity as British. I mean for 15 years my Britishness was pretty core, if not culturally, then certainly in prosaic practicalities. And so you can bet I voted in the 2016 referendum and was deeply disturbed by the outcome (and the ongoing cavalcade of rudderless political clusterfuckery that has followed).

But now, does it matter less to me? Now I can just duck out and remove myself from the awkward realities should it go through, or should I fight less hard or be less vocal as the next months play out?

While those questions are tricky, and the assorted confusion around assimilating my Irishness into my identity is discomfiting, I’ll do so remembering that here I am, with a fistful of passports like a winning poker hand.

Luck of the Irish?