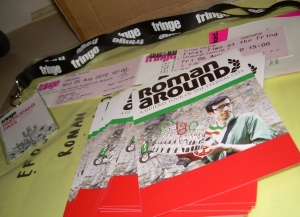 I was up in Edinburgh for nine days. I did seven shows, saw eighteen, and am now back home wondering what exactly happened. And also wondering why I can’t stop smiling.

It may take awhile for me to figure that all out, but what I do know is that the Edinburgh Fringe is awesome.

I learned a lot. Met quite a few interesting people, handed out a lot of flyers, and saw some shows – brilliant, great, ok, and terrible. There was such a buzz, and so many cool people around doing all kinds of wonderful things at all hours of the day and night that it was absolutely exhausting. And an amazing thing to be part of.

Also importantly: Roman Around is now a much better show than before. With new jokes. It’s also more responsive to the audience; more rhythmic and just ‘tighter’ than before.

Something I learned, from the engaging and wise Mr. Bunk, is how to make an incredibly persuasive pitch at the end of a ‘pass-the-hat’ show, which allowed me to take Chiara out for a great lunch and dinner after she arrived.

I also learned (from someone who knows) that Roman Around could do alright on the Canadian Fringe circuit.

And those are just two examples of the type of education that one week in Edinburgh has got me all excited about.

Because now that I’ve put this show on, and been to the Edinburgh Fringe, I’m excited about the possibilities: for this show, for performance, for festivities and for travel and adventure.

But for now, I’m focusing on the last two ‘certain’ dates for Roman Around: 21, 22 August at the Camden Head Pub as part of the Camden Fringe. And also my dissertation. Ahem.