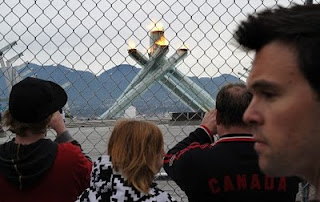 The global image of polite and unassuming Canadians is being sorely tested by the quest for Olympic glory.

Hosting the Olympics is supposed to be a great honour for a city. Scroll these 60 key Olympic statistics and behold! But it’s not working out that way for Vancouver. From canceled tickets and delayed events to heavy-handed security and awkward glitches, every day brings a new revelation of organizational ineptitude or callousness.

These 2010 Olympics is undoing decades of Canadians-as polite-and-helpful stereotypes. And in the British press especially, there is whinging, complaining and finger-wagging galore. All those whiners need to suck it up.

These, the XXI Winter Olympics, are Vancouver’s games, and Vancouver is free to mismanage them in any haphazard, insensitive and incompetent style that they want. Screw everybody else.

The big competition for Vancouver was the bid to host the Olympics. They won. Besting Salzburg, Austria and PyeongChang, South Korea in a tense finals. So, these games are basically their glorious victory lap, so why should they care how visitors actually feel during the games?

Why shouldn’t they erect a giant chain-link fence around the Olympic cauldron? Anyone who would seek to deny them the opportunity to fail at simple things like having proper Zambonis, accurate biathlon times and providing a safe not insanely-fast luge course is just jealous.

On the slopes, Canadian athletes are also doing their best to chip in on the bad hosting duties. They are not keen on sharing their podium with any of the other nations. Started shortly after Vancouver won the bid, Own the Podium is an amateur sport initiative that provided $118 million for amateur Canadian athletes. The stated goal? To help Canada win the most medals at this Olympics. As an added incentive, each gold medal winner has been offered $20,000.

And it’s not just funding: prior to the games Canada privileged their own athletes at training facilities to give them a competitive edge. Every hometown angle has been exploited to provide Canadian athletes an advantage.

Ladies and gentlemen, this is the new Canada. A Canada that wants to win, and doesn’t care about hurting your feelings. 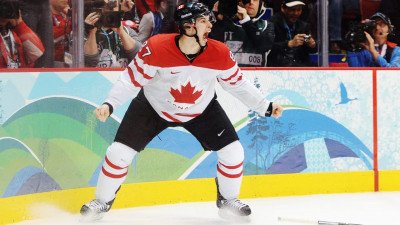 Do Canadians approve of this new cut-throat attitude? With red-and-white, full-throated enthusiasm, they do. Crowds are enormous and boisterous, Olympic merchandise is flying off the shelves and Vancouverites are in the words of Canadian rock band Loverboy, lovin’ every minute of it. Patriotic Canadians will still say please and thank you, they just might shout it in your ear while giving you an unexpected, Olympic-ecstasy and beer-fuelled bearhug. Don’t be intimidated. Get used to it.

What option do the media party-poopers have? Go to another 2010 Winter Olympics? No, they have to face the facts. These XXI Winter Games are Canada’s Games, and we literally Own the Podium.

*As it turns out, the glitches have all been dealt with, and the games are now going swimmingly. They’ve even managed to quasi-solve the Olympic flame fence issue by putting up some plexiglass. Although, of course, the British press can’t stop rehashing the glitches, but that’s fine, Canadians can take it. We are more.