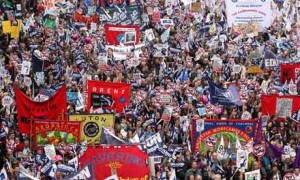 On March 26th 500,000 people marched through the streets of London against the savage cuts the current coalition government has been undertaking without any mandate whatsoever.

Led by David Cameron and incompetently supported by the once-upon-a-time-political-upstart-now-has-been Nick Clegg the coalition government have been dismantling the public sector and making slight concessions to regular people, whilst ‘reshaping the economy in the interests of business‘.

Meanwhile, in Canada, former Prime Minister Stephen Harper spent his Saturday asking the Governor General for a writ of election. Because the day before Canadian MPs gave Harper’s government a vote of non-confidence.

Between the two, there’s the will and the way for change, but independently, I’m not sure much is going to happen.

Here in London the government has already made it clear that half a million people taking to the streets won’t affect their plans. David Cameron didn’t bother to comment on the demo – because half a million angry citizens isn’t really something a leader should concern themselves with.

Meanwhile, in Canada, the polls are already suggesting another – albeit narrow – Tory victory.

Now obviously, the respective situations are different, and the level of cuts here is ridiculously, obscenely and cravenly extreme, but still, being aware of both events, and having a vested interest in the outcome of each, I can’t help willing there to be a bit of crossover – a bit more protest and hullaballoo in Canada, and a bit more toppling of a non-representative and generally terrible government ruling without a clear mandate here.