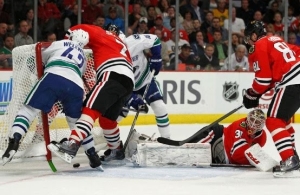 Like every other Canucks fan I’m happy the Canucks are playing Chicago again this year. It’s an opportunity for redemption. Or revenge. Or both.

I’m thrilled about it for both of these reasons and one more crucial one:

I can watch some or all of the games at an only-somewhat-unreasonable time!

When the Canucks play on the West Coast those games start at 3 or 4am here. That’s too late to stay up and start watching, and too early to get up for.

I’m not saying I won’t take one or both of those approaches in this year’s playoffs (it has certainly happened in the past), but it’s not something I can make a habit of.

But playing in Chicago is an acceptable compromise. Last night’s puck drop was at a sensible 1am. As a bonus, Chiara and I played a game of Scrabble and watched the first period together. I may not have been winning at Scrabble, but after the way the Canucks played the first period – and the fact they went into the break up 2-0 – well, I went to bed happy.

And woke up to the great news that they downed the Hawks in a lopsided victory just short of a rout. It’s only one game, but it’s a great start. I’m hoping they ride that momentum into and through Game 2. Then come home and close the series out in hockey-mad Vancouver.

And, while I’m making hopeful predictions, I hope they then play Detroit in the Western Conference Final.

Because, if they win this series, and end up playing San Jose, it’ll be back to awkward west coast hockey-times, but if they play in Motor City, I’ll get even more reasonable hockey times.