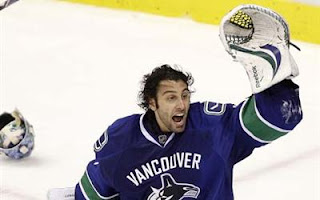 Otherwise, I would never ever get up before 6 in the morning. Particularly not on a weekend, unless I was going fishing.

However, time zones being what they are, my playoff fever has been waking me up at ridiculous hours, to watch some streaming on the internet.
No jokes. I don’t even use a conventional alarm, I use my internal hockeyclock.

I don’t love watching streaming live sports on the internet. But I do love the Canucks, and the way they’re playing.

Therefore, I need to sacrifice a little sleep to keep my head in – and eyes on – the game. These Stanley Cup playoffs are a big deal.

If you feel the same, or are preparing for a leap onto the booster bus, watch this piece of playoff fever-inducing towel-waving awesomeness.

Does that mean I have to get up at a very weird time tomorrow night/Wednesday morning?

Will I have to set my alarm?