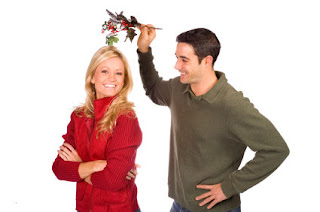 Kissing under the Mistletoe is a lovely holiday tradition. But the origin is not what you think.

Though the office had done a whiz-bang business in the sale of jingle bells, Olaf decided against purchasing the full raft of Christmas bonus mistletoe. He purchased just half.

He hid the rest of his profit in a nearby glacier. The money he later gambled away on reindeer races. But the point is, that year, he didn’t have enough mistletoe for everyone. Naturally, when he announced this after the hot wine toasts, and before the stomp-dancing, the staff were outraged.

To quell the outcry of disappointment from his staff, (which he probably could have anticipated) Olaf quickly devised a plan. He would make it into a competition – yes, that would be fun! Everyone begrudgingly agreed.

Despite the bloody noses and chipped teeth (or perhaps because of them) everyone had so much fun they forgot about the mistletoe shortage.

From that Christmas on, the tradition of smashing faces under the mistletoe spread rapidly. It traveled south, through Scandinavia, before hitting Germany and spreading east and west. From there, it traveled far and wide.

Of course, over the years and through the many miles, the exuberant face-smashing-to-win-mistletoe tradition has been watered down to a kiss – somewhere between a gentle peck and a deep smooch.

And nobody gets the mistletoe.