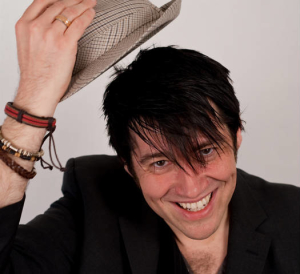 When Doug Segal came on stage, I had to quickly re-calibrate my expectations. He was not, as I had somehow convinced myself, an awkward nerd in his late twenties. Nope he was a hairy-chested, brash belt-buckle sporting, middle-aged former ad agency man.

How had I so misjudged him? I think I confused him with another guy named Doug I went to high school with 15 years ago. Clearly a mind like mine wouldn’t be easy to read. Right? Wrong.

He read my mind. And then he blew my mind.

The first thing Segal did was toss some ping pong balls into the audience. and once he had six audience members – myself included – to pick a number between 1 and 49. The six numbers we picked were all sealed in an envelope sealed inside another envelope… ON A LOTTERY TICKET HE HAD BOUGHT EARLIER!

Think about that for a moment; I’ve been thinking about it ever since.

From that opener the show just tilted into even more amazing feats. To me it seems like magic, but Segal is careful to explain that he uses no magic or audience plants, just “persuasion techniques, statistics, reading body language, subliminal influence and two key advertising skills: ‘cheating and lying’”. He moves through a number of different set pieces of audience participation involving planting suggestions, predicting responses and plucking words and numbers out of people’s minds. Each one slightly different, and all impressive.

On the night I saw the show suffered a little from a strangely subdued audience – relative to the awe-inspiring stunts taking place on stage. It might be a culture thing – the crowd was quite international – but where I’m from, people don’t teach other people to read minds in the space of five minutes (as Doug did in the finale).

The show ran overtime, which I suspect was a result of Segal working so hard to get and keep the Greek-heavy crowd onboard. But the length notwithstanding, afterwards most of the audience was milling around the pub downstairs, eager to shower him with chat and compliments when he emerged.

Rightly so. “I Know What You’re Thinking” is a show well worth seeing – whether tonight, or when it tours – which it surely must be doing soon.

Though I unfortunately wasn’t given the ability to read minds (as I thought I had been promised), Doug Segal showed me that it can be done – without pomp and artifice.