Federer’s a dick (as is any good antagonist) 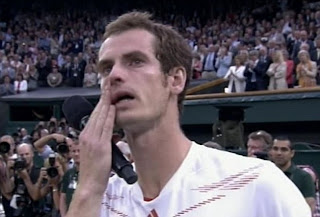 Yesterday I watched my first Wimbledon final, and I can say conclusively, after watching that whole episode of heart-wrenching, rain-soaked, pulse-pounding, blood-letting, gladiatorial battle – heavy on the Middleton sister reaction shots, and not light on drama and emotion – that Roger Federer is a total dick.


Andy Murray had ZERO Grand Slam victories before yesterday – Hell, he hadn’t even been to a Wimbledon final. And here he was, finally getting his chance to win a Grand Slam, in front of his UK fans no less. Then along comes the mighty Roger Federer, with SIX Wimbledon titles and SIXTEEN Grand Slams already in his trophy cabinet, and a really smug smile on his posh Swiss face.


This story is obviously supposed to end with the younger, more fallible-seeming Murray getting the win, through hardwork, grit and sheer will, possibly even employing a secret technique his Obi Wan-like mentor passed along before he was decapitated by a cruel slice of R-Fed’s Black Racquet.


But that’s not what happened; there was no underdog comeback spurred on by a match point between-the-legs trick shot attempt from Federer. Just cold calculation and technical finesse from an experienced champion to grind out the victory.

To me, that’s not just disappointing: that’s bad storytelling. What a shitty ending. Until you consider that Andy Murray needed to experience this most public of defeats in order to truly win the hearts of the nation (and indeed the entire sporting world), through an honest and raw concession speech. Now we’re getting somewhere.


Because, after Murray’s speech brought most of Wimbledon to tears, we got the chance to see Roger Federer hold up the trophy (his seventh!?!), all smirky and nonchalant, so we could begin to truly loathe him. And then (and only then) could our true desire for Murray to win a title start to blossom. The juxtaposition of these images is powerful.


In fact, I’ll bet that Andy Murray is right now as I type this skipping rocks at his parents modest lakeside cabin, contemplating giving it all up and taking a normal job at his father-in-law’s forklift factory, while some soulful indie singer-songwriter plays a tune entitled something like ‘The Chapter is Closed’, or ‘I’ve Been Pushed Too Many Times’.


Yeah, it seems tough now, as if all is lost. But know this: as sure as the Beckhams were immaculately groomed yesterday, there is a sweet-ass hard rock training montage just around the corner. Over distorted guitars and a pounding bass drum, Murray will run up and down a set of public steps, do some chin ups, and smash water balloons with his racquet at the beach. And, when that sequence comes, Murray’s victory will seem that much sweeter for his having left it all on the court yesterday.


And for those people who might argue that Roger Federer could just as easily have his own narrative, with him as protagonist, I say this: everything I need to know happened Sunday afternoon. Andy Murray’s the star.


Plus, I give you this picture of Happy Gilmore’s arch-nemesis Shooter McGavin, who – save for the side on which he parts his hair – looks a whole lot like the Fedster. 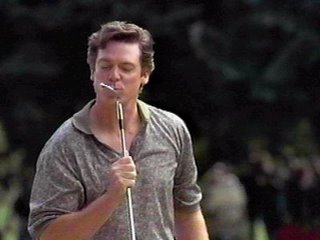 I rest my case.