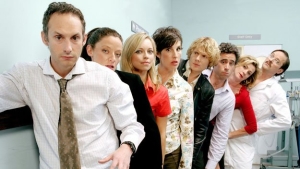 Just finished watching two seasons (plus 90-minute special) of Green Wing. It takes place in a hospital – and involves a lot of surreal character comedy and pretty much zero hospital-type stuff. It’s weird, human, witty, and occasionally features a camel.

That’s not even half the story, though. There’s all kinds of charming inanity, attempted murders, bizarre sexual peccadilloes, nebbish courtship, practical jokes, and cliffhangers. The writing is sharply funny and witty though it’s difficult to tell what is scripted and what is off-the-cuff.

It was a slow-burner. Not even two minutes into episode one Chiara said “I hate this show.” I was likewise unsure. Two episodes later we were hooked.

I’m not sure how the Channel 4 player works geographically, but if you’re in the UK, tuck into it here. 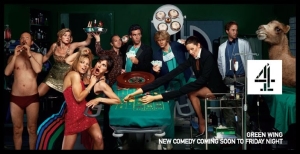