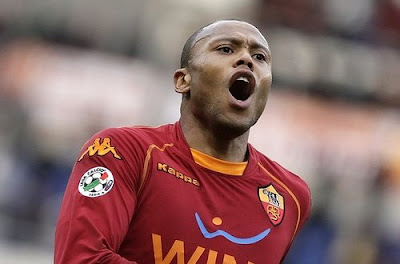 Even though you haven’t missed my haphazardly-informed and fervently one-sided football ravings, I have. I’ve decided to keep you up-to-date on what’s going on with AS Roma, at least as it relates to the Champions League. Their next game in Champs League is against Arsenal at Emirates Stadium in London. This match will not be easy. For anyone. That post is forthcoming. Hold your breath.

For now though I’m going to tell you the three best places to get your football fix on the internet.

AS Roma on the Offside:. The place to get your giallorossi news. Previews. Reviews. Humour. Videos. And tonnes of insightful, invective-filled comments. Hands down great.

101 Great Goals:. Maybe you can’t watch every football game in the world. Maybe you only want to see that amazing goal you read about. Or highlights of an international friendly. Or whatever. They’re here. As a bonus, they usually don’t use youtube, so you can watch them at work. Thanks 101!

Run of Play: As they describe it: “The Run of Play is an independent soccer blog with readers in more than 150 countries. Our aim is to bring you the latest football news from around the world with style, skepticism, and wit. We’re especially committed to presenting sportswriting that looks beyond the ingrained assumptions of the medium and explores the aesthetics, psychology, and cultural role of sport in inventive ways.

Founded by Brian Phillips in October 2007, The Run of Play has in its brief existence been endorsed by the BBC, linked to by Reuters, ESPN, and the New York Times, derided by the Guardian, and pointedly ignored by the Daily Telegraph.” And regularly enjoyed by Ryan Millar for a couple of months.