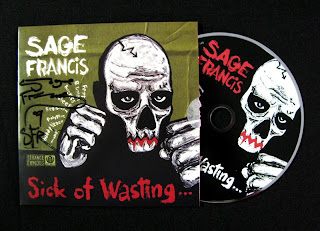 Let me turn you onto some fresh new music so you can download them and put ’em into your boombox.

Go to Ugsmag to get the download link. As a bonus you can read about the origins of each track. This isn’t an album per se, it’s a collection of unreleased material new and old.

If you dig it, and you probably will, go and order some stuff from his label Strange Famous Records.

If you’re not familiar yet, I suggest bumping ‘Strange Fame’ the first track to get at his sense of humour – daily life raps of an underground superstar, with David Bowie samples.

Then check ‘Conspiracy to Riot’, which is right up there with the rest of his hyper-political work. I suggest tracking down ‘Makeshift Patriot‘, written a month after those two planes crashed into the skyscrapers in New York on the eleventh of September in 2001, so you can hear what focused, articulate anger sounds like.

Another worthwhile download is the Cybersex sampler from Sub Pop. It’s a diverse collection of music with tracks from Flight of the Conchords, Fleet Foxes, Iron and Wine and more.

As a nostalgic bonus, the Cybersex webpage is laid out in the fashion of old school internet goodness, back when it was just scientists geeking out on their series of tubes.