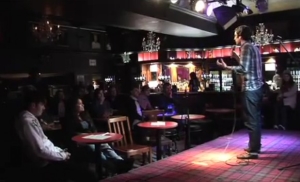 I not only did my first stand-up gig ever recently, I also did a second. This second gig was a five-minute set as part of the new Funny Business nights at The Monarch pub in Camden. Organized by Dai 4 Films.

The night was alright. My set was OK. Everything was decent. The great thing was that they filmed it all, and cut together a short, punchline-free chunk of my set and put it on Youtube. And misspelled my name.

They randomly paired me with another performer named Donna Scott. Click through to see the clip.