Guy Fawkes all over again 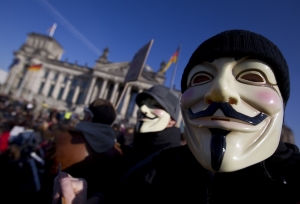 Everybody loves Guy Fawkes day in the UK. Something to do with fireworks and bonfires. Oh, and celebrating the maintenance of the status quo.

This year it’s different. With the spread of the Occupy protests, and the V mask from V for Vendetta (and its association with the Parliament exploding anti-hero) long since having been adopted by protesters, it’s all of a sudden the day itself.

In addition to the bonfires and fireworks there are plans to kill Facebook, close accounts at mega-banks, and march on Parliament. And probably some other bespoke pop-up events.

I’m not into mischief, but I like the confluence of the symbolic/historic and the modern zeitgeist. The global spread of dissent using social media coupled with the local in person throwback to a centuries-old act of rebellion.

Considering the failure of the recent G20, and the general nefarious unscruplousness of the banking system in general, and the antiquated dodginess of the City of London in particular, it’s reassuring to have something constructive to believe in. Something that belongs to real people, who are working for change.

Tonight I’ll be out not causing havoc, but supporting the positivity and creativity that can be born behind a mask.