Happy Canada Day… or else! 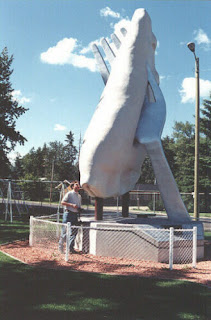 Canada is big. And not just geographically – although it does have ten provinces, three territories, and nearly one Alaska. Any way you look at it, it is fucking huge – and definitely not to be fucked with.

How big is Canada? Canada is so big we need appropriately enormous food, like the gigantic perogy pictured above. This mega-dumpling is in Glendon, Alberta, Canada; a small town with a giant perogy on a giant fork. The rest of the world has zero giant perogies combined, which means: Canada 1, Rest of World 0. This is known as the ‘perogy advantage’.

Not content to rest on this sizable technology gap, Canada has plenty of other massive objects: a huge hockey stick, a colossal coffee pot, an incalculably unwieldy ballcap and so much more.

Consistent with the expansive Canadian style, the country isn’t content with having just one language. It has a proud bilingual history of speaking both a type of English, and something called Québécois – which is French that sounds like it is being spoken by a cartoon pirate. These swashbuckling buccaneers of yesteryear captured ships on the world’s waterways. Nowadays, pirates focus on Somalia. It is even more dangerous there than Canada.

Speaking of waterways, Canada has more lakes than any other country. Some of them are so great that they are universally known as “Great Lakes.” This is yet another reason why Canada is so feared and respected on the world stage. Although Canada is frequently lumped in with America by European and Asian journalists and statisticians, this is just because these pencil-necked sissies fear to stare Canada in her cold, hard face. Canada is the Medusa of nationstates.

Canada has many nicknames. America’s Hat, America’s Little Brother, Mexico North, The Great White North and Beavertown are just a few nicknames meant to soften the image of this lunatic land.

Lunatic? Yes, Canada is so nuts the dollar coin is called the ‘loony’. Everybody in Canada calls it that, and nobody cares what you think. The paper money is also out of control. It comes in all kinds of crazy colors; a veritable rainbow of who-gives-a-fuck dangerdollars.

When people think of Canada they often think of ominous mountain peaks, sinister evergreens, or the deadly beaver, Canada’s national symbol. Canada chose this industrious and fearsome rodent as fair warning to other countries.

Until people were worried about angering Canada, “You mess with the beaver, you’re gonna get the teeth,” was a common expression in many other weaker countries.

Today is Canada Day. You better start celebrating – if you want to live to see tomorrow.