I used MSN once, last year, in Canada. I remember it, because i signed up for a hotmail account. Now relegated to the dead-letter-office of lost passwords. But I managed to connect with a few friends, but I had to go out and didn’t really know what to say, or any of the etiquette; I found myself getting internetpeeved with a Swedish friend though he was on the phone. That’s fine if you know MSN lingo for being on the phone. But I didn’t.

Anyway, I gave up on MSN and life continued for me as before. There was no void in my life. But MSN Video Networking has filled a gap in my life that’s existed for about four months. A gap between me and my nephew Roan. But now that his parents have a webcam we’ve dusted off the webcam that we’ve owned for over a year but had never used.
NOW I CAN SEE THE LITTLE GUY! SEE HIM MOVE AND SIT IN HIS BUMBLE CHAIR! LAY AROUND AND MAKE BABY NOISES! IT’S INCREDIBLE!

I realized things had gotten out of control when I took almost a dozen photographs with my phone of the computer screen and the family on the other side. As weird and fucked up as that might be, I think it’s pretty awesome when technology can be used for good and not evil, or the lesser evil of wasted time. Which is what I usually use it for.

Except for you, Dear Diary, you’re not wasted time… 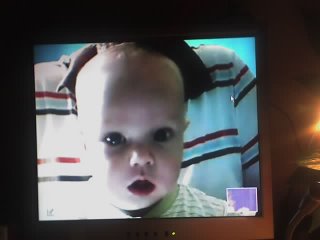 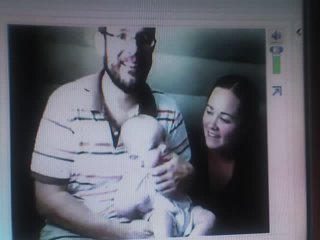 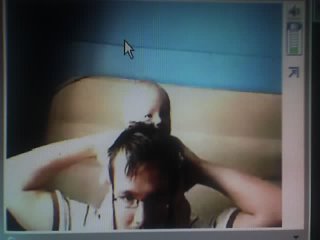 I love that child, I cannot wait to meet him. And I need only wait three more weeks.