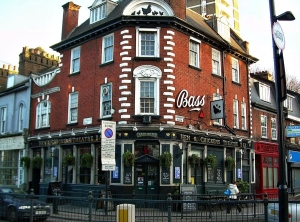 Cars and lorries chug around the square, peeling off to the M-something to the north, or penetrating into the heart of north-east London. Smack in the centre of this whirl of vehicles is an oasis of lawn and tall trees. A park – completely inaccessible – surrounded by a fence of circulating traffic, and an actual fence. It has no gate, nor a crosswalk to facilitate access.

Highbury and Islington is a representative slice of London – double-decker buses, cars, and lorries circle a roundabout, there’s an underutilized section of green space. The buildings around the square are also representative: charity shop, a couple of chicken places, tube station, a bank and of course, a pub.

But Hen & Chickens is more than a pub. It is also a theatre that features new comedy, including impro, sketch, stand-up and any of the above in various stages of completion.

I’ve never been inside, but it may just be my favourite pub in London. I love comedy (doing and watching), I adore beers, and I can be contented with a weekend paper, book or good company in the dark, rich atmosphere of a proper London pub for hours on end. Throw in a comedy show and it could be much longer before I emerge.

But fear of a late resurfacing is not what keeps me out of the H&C. The most time I spend near the Hen and Chickens is a few idle moments peering in the window whilst waiting for the 277 bus to peel off of the traffic and take me home.

And as soon as a bus I intend on taking arrives, I switch into what some might call ‘commuter-mode’ but what I prefer to think of as Jason Bourne-mode; with a powerful urgency I slip through the crowds and make an escape.

Of course, I always plan to come back up here and catch a show – or at least a beer – but it just hasn’t happened. However, with the expectations I’ve got built up, I may prefer to just keep the Hen & Chickens as it exists in my mind: the perfect, lighthearted, beer-soaked respite from the traffic of the corner on which it stands watch. A purpose built booze and laughs oasis, maintained forever as it should be – unspoilt. Just like the patch of green in the centre of the square it stands watch over.