Hip Hop and Comedy in Brighton! 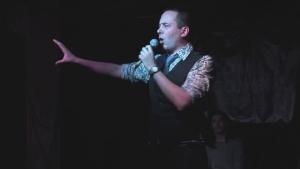 I was in Brighton yesterday. As enjoyable as it was – in and of itself – I was there for a reason. That reason was to take a hip hop/comedy/compering workshop with Rob Broderick. The event was put together by the wonderful folks at A Fish Called Improv.

Rob has crazy comedy cred as a multiple award and competition winner. And as for hip hop, he opened for Atmosphere on their last tour. When I saw he was giving a workshop,I knew I wanted to be there, and kick it on the freestyle comedy tip with some like minds. And so we did.

After my solo meandering through Brighton, I got to spend the evening in the basement of Sanctuary Vegetarian Cafe having tonnes of laughs and epiphanies with an eclectic group of folks. The levels of experience were widely varied, but with Rob’s management we all had chance to be successful riffing in front of a crowd, and getting filled with some confidence on tackling the stand-up comedy circuit and not worrying too much about writing finely crafted jokes, instead utilizing our years of improvising and hosting experience to carry us through a short set of kicking it friendly-style with a crowd, tossing in a few pre-formed ideas here and there, but mostly just riding it out. (I’m not sure that second one applies to everybody, but it definitely applies to me.)

Next we hit the beats and rhymes.

The hip hop section started at Square One and came along nicely to Square Three or Four. Though after rocking mics as hard as I have in the past, both freestyle and composed songs, I wanted more. But I said nothing, because collectively we were in uncharted territory.

Once we’d all had a successful sampling of trying to rhyme to the beat, Rob threw me and another hip hop savvy participant up front. He and I improvised a scene with a few hip hop tracks thrown in.

That guy and I are now not far from doing a hip-hop/improv/stand-up show. seeds have been planted, are sprouting. And that’s no joke. More on that project as it develops.

Finally, I rode the train back to London with Rob and Nathan, another participant. It had been a long time since I just kicked it with some improvisers when we’re all high from improvising. Not much beats that feeling.

Below is a video of Rob doing his thing. I highly recommend checking it out. Ten minutes is a little longer than the videos I’d usually post, but you’ll have some heartwarming laughs and see the main man of improvised hip hop comedy do what he does best. And you need to see him solicit the material from the audience, so he can weave it into “the most beautiful musical you’ve ever seen.”