I can’t believe it

Maybe the announcers were right, I mean that’s the job of a pundit. Maybe the first goal was a touch offside. But Italy certainly looked everything less than unsolvable. The World Cup’s fiercest defense gave up three goals. The first one in the 2nd minute. And France got their revenge. No question they outplayed Italy. Consistently looking dangerous, controlling possession, SCORING THREE TIMES! Sure the home crowd helped, and the referee was crappy and random, handing out cards where none were called for, and withholding them when they were, but he didn’t decide the game.

I don’t put much faith in this new coach. Donadoni. Sure he’s got a good Italian name, and he looks plenty Italian, in that aging-gracefully vein but he hasn’t been doing his job behind the bench. His job is to win football matches.

So far under his stewardship Italy have managed a 1-1 tie with perennial football nobodies Lithuania, and then soundly lost to archrivals France. Not exactly a great start for Euro Cup qualifying is it?

He’s also brought back Antonio Cassano to the Italian national team. He played in Totti’s #10 jersey, and performed really just the second half of that number: zero. Actually that’s not true. He made one good pass. One. More importantly the guy is a shitbag, and worse than useless. PLus, he basically stole Totti’s number. Totti is the number 10 of the Italian national team (and AS Roma). He’s the guy that plays just behind the strikers. This Cassano, whaddacunt.

I mean, I guess he’s good. He must be. People who know shit about football pay him lots of money, and ask him to play on the national team, so he’s gotta have some worth. But I haven’t seen it. All I know of him is that last season Roma sucked while he was a member of the team, and he wasn’t even playing. He was just being a crybaby bitch and spoiling it for everybody. Soon as he was traded to Real Madrid Roma went on an 11 game winning streak. And Real Madrid isn’t too thrilled about the deal now: Cassano doesn’t start, nor does he see much game time as a sub. Maybe Donadoni should think about doing like Roma, and dumping this deadbeat. At the rate they’re going they’re going to need a win streak to qualify for EURO 2008.

However, it also wasn’t just Cassano’s fault, and though he was quiet(ly nonexistent) he got subbed out in the 70th minute and Italy still couldn’t do enough to threaten the French goal.

Not exactly a convincing defense of the World Cup Title, but we’ll content ourselves with the fact that we have the trophy and France doesn’t.

Unfortuantely, thanks to Donadoni, we also have this guy 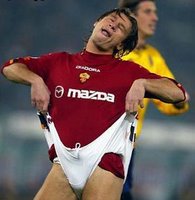