I’m not a dick, really 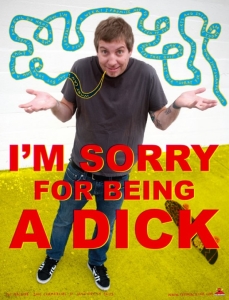 In the past couple days I’ve twice been reminded of a bitter truth: I’m a total prick.

However, that doesn’t always read to a stranger. In fact, in my efforts to be charming and funny, which I do almost ceaselessly, I’ve managed to come off as a right prick.

On back-to-back days. On the first occasion I was out with Marbles to have cake and discuss our next project. The cake shop was empty when we showed up at around 5:30. Politely considerate of the wishes of the staff we inquired if they would soon be closing. After first assuring us they would be happy to stay open as long as we were there, the waiter embarked on some banter-ish comments about ways that he would indicate when they were ready to close – putting up chairs, banging dishes etc.

We were all enjoying a light chuckle when I told him: “Actually, that would be great. I respond really well to passive aggression.”

There was an awkward pause. And then he walked off. It was clear that my response – somehow – went too far. It was not as funny as I imagined, and my tone sounded mildly threatening. My quip also introduced an unexpected neologism and unpleasant psychological condition into a conversation about cake.

What can I say? I got caught up in the chat of the moment.

The second occasion was the very next day. I was shopping at Boots. I needed some floss; I go through a lot of floss. On my trip to the floss aisle I was waylaid by a ‘3 for 2’ sale of men’s beauty products. Now I’m aware that men shouldn’t have beauty products, they should be ‘handsomeness tools’, but nonetheless I stopped, and after minutes of agonizing deliberation I selected for purchase some moisturizer, some aftershave, and some other product which I don’t remember, but may one day prove useful.

I then continued on to the floss aisle. A shop assistant, who had noticed me lingering at the Men’s Sexiness Aisle, looked at me and asked

“Did you know that those products are on sale?”

“That’s why I have three of them.” I smarmed.

My response was meant to be a warm affirmation with a hint of thanks, but as soon as the words escaped my lips I realized that I actually sounded like a patronizing cunt. I was probably just as stunned as she was.

I turned away to avoid making further eye contact, quickly grabbed some floss and headed for the tills.

How could my words, so quickly formed in my mind as instruments of good-natured and light-hearted bonding and bonhomie, turn so acid when they reach shared air?

Thankfully, I’ve discovered the answer: it’s not because I’m a dick, it’s because I’m perpetually misunderstood. Yep, that’s it. And this is fantastic news. I can now continue to act like a total dickhole (even if unintentionally), and cultivate an air of victimization. I can work on my non-verbal cues for: “Sorry if I’m a dick, but it’s not my fault! The world just doesn’t get me.”

I think I’ll start with a peacoat and a notebook, maybe add in some rapid blinking and a furrowed brow, and then just see how I go.

There. I don’t know how all the strangers I’m rude to will take it, but I already feel better.