Impressive Improv: they nailed it! 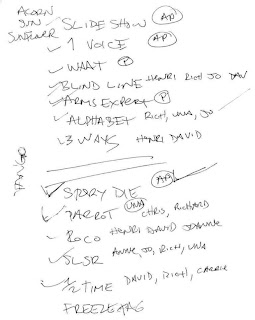 My third ‘Impromptu!’ Brussels Beginners Improv Session (courtesy of the American Theatre Company) was again a success of which I’m very proud. I say ‘again’ because the two prior workshops were also very successful, but there was a special element to this one: disappointingly low enrollment.

In the end only 4 students completed the course. This could have been a Very Bad Thing, but was, in the end, a Great Thing.

I was concerned that low numbers might equal low energy and less enjoyment or Return On Investment (ROI), for both participants and instructor. 24 long and painful hours spread over two agonizing weekends.

On the contrary the laughs were plentiful from workshop start to showstopping finish, even while the learning curve was steep.

As an interesting sidenote: the depth of work I was able to do with such a small group was rewarding and eye-opening.

And last night, there was an outstanding improv show that featured hard work, well-earned laughs, and a cast full of flushed success. A decision was made to bolster the number of performers so we could have a great show – featuring the four participants but ably supported by some favorite folks – with a slight alleviation of the pressure. This also provided some very talented improvisers some sorely-lacking-in-Brussels improv stage time.

In the end the cast was the participants, plus 3/4 the cast of The Power Force, and the delightful Mason family, and hosted by me. If you weren’t there, you missed out, and if you were there, you laughed until beer came out your nose. Thanks again everybody.