Incompetence is the gateway

We’re on a short family holiday this week. A little Dutch seaside time to kick back and relax. I’ve also been using this time as an opportunity to speak more Dutch. We’re away from home, life’s on pause, and I’ll never see any of these people again. And that’s great, because I’ve been making lots of embarrassing mistakes. I normally hate sucking at things and embarrassing myself, but that attitude is shifting.

Sucking is no fun… or is it?

It doesn’t matter if it’s learning to swim, or fumbling your way through a new language, or practicing cartwheels. Doing anything unfamiliar is gonna go badly at first. That’s because you lack practice. And because you lack practice, you lack fluency. It thus feels (and looks) awkward. In the short term that can be totally fine. In fact, that novelty can be part of the allure. But if you want to improve, you’re going to have to accept the suck. Only once you’ve accepted that cold hard fact can the work of getting better begin.

Here’s an example: if you don’t know how to play basketball, you can perfectly enjoy shooting some hoops once in a while. What a fun activity that you do so rarely! But as soon as you want to get good at basketball, you have to learn all the rules and the plays, you’ll have to train more intensely, to boost your fitness level and crank up the individual skills. Whether you want a career in the NBA or just want to make some noise at a Sunday pick-up game, if you start training properly you’re going to have to reckon with the fact that you suck at basketball.

In my Dutch example above, I’ve just had to just accept that I don’t speak it very well, and there’s really no way that I’m going to speak it well, without speaking it terribly for a while. So I’m embracing that suck zone of trying things and fumbling, feeling my face flush as I search for the right word, or I have to repeat myself for the third time. That hot prickly feeling is the only way to improve. 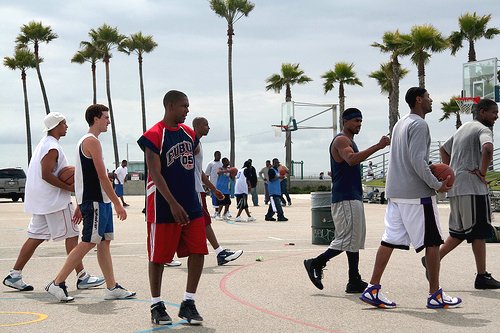 Embracing your own incompetence

It was reading a Seth Godin quote that got me enthusiastic about sucking. He wrote that learning is “the difficult work of experiencing incompetence on the way to mastery.” When I read that, a light went on for me; like watching a slowed-down three-card-monte, I realized I’d been paying attention to the wrong thing.

Learning the thing itself isn’t the hard part. The hard part is sitting in the discomfort of being bad at something. If you want to learn Dutch, learning Dutch isn’t the hard part; having the emotional self-regulation to cope with sucking at speaking Dutch is. Same with basketball. I’ve also been wrestling with my limitations as I tried to edit the rap video for Aces & Eights. It was frustrating, but (slowly) learning to edit is cool.

Few people pick up new hobbies and learn new languages and skills when they’re in their 60s, 50s, 40s and even 30s. That’s because they’re trying to avoid that discomfort. There’s a sense that once we’re ‘adults’, we’ve gotten past that state of sucking. But that’s a damn shame, for two reasons.

But even when you finish sucking at something at start improving, that doesn’t mean you need to let go of the idea of being new at it.

Zen Buddhism has a beautiful word, Shoshin, which means ‘beginner’s mind’. The Wikipedia entry says Shoshin “refers to having an attitude of openness, eagerness, and lack of preconceptions when studying a subject, even when studying at an advanced level, just as a beginner would.”

So go on, get out there and suck and, even if you’re not sucking, embrace the Shoshin.

How was your improv workshop?

I’ve benefitted immensely from this journey which I would recommend to anyone looking to learn more about themselves in a fun, immersive way.”

“Your Taking It Easy session helped me relax more into the truth of a scene and let it grow more organically instead of pushing too hard to make it funny or dramatic. I loved that you were really clear about what you wanted us to get and how the exercises played into the scene work we did later. I really got a lot from one short session.”/fusion_testimonial]
Pedro, Lisbon
“Ryan really made the most out of the workshop. No time-wasting. He gets to the point quickly, in a clear and effective way”

“Plenty of energy, enthusiasm, good clear guidance on how to make the scene ‘deliver results’ without killing the improviser… Ryan’s enthusiasm for improv is infectious.” [/testimonial]
Elsa, Lisbon
“I loved loved loved your workshop. I liked the way it was structured and meaningful. Time flew unnoticed. I liked the shortness of the exercises, the surprise and fun, and the fact that you gave me so much to explore. I now can be in an empty prison cell or in a desert island and never feel alone or bored any more. Now I can expand my world.”

“Ryan’s approach to improv is both fun and inspiring. However, Ryan demonstrates that improv goes way deeper than that. It provides valuable lessons on how to communicate and collaborate more effectively. Ryan is a master and I learned a lot.”