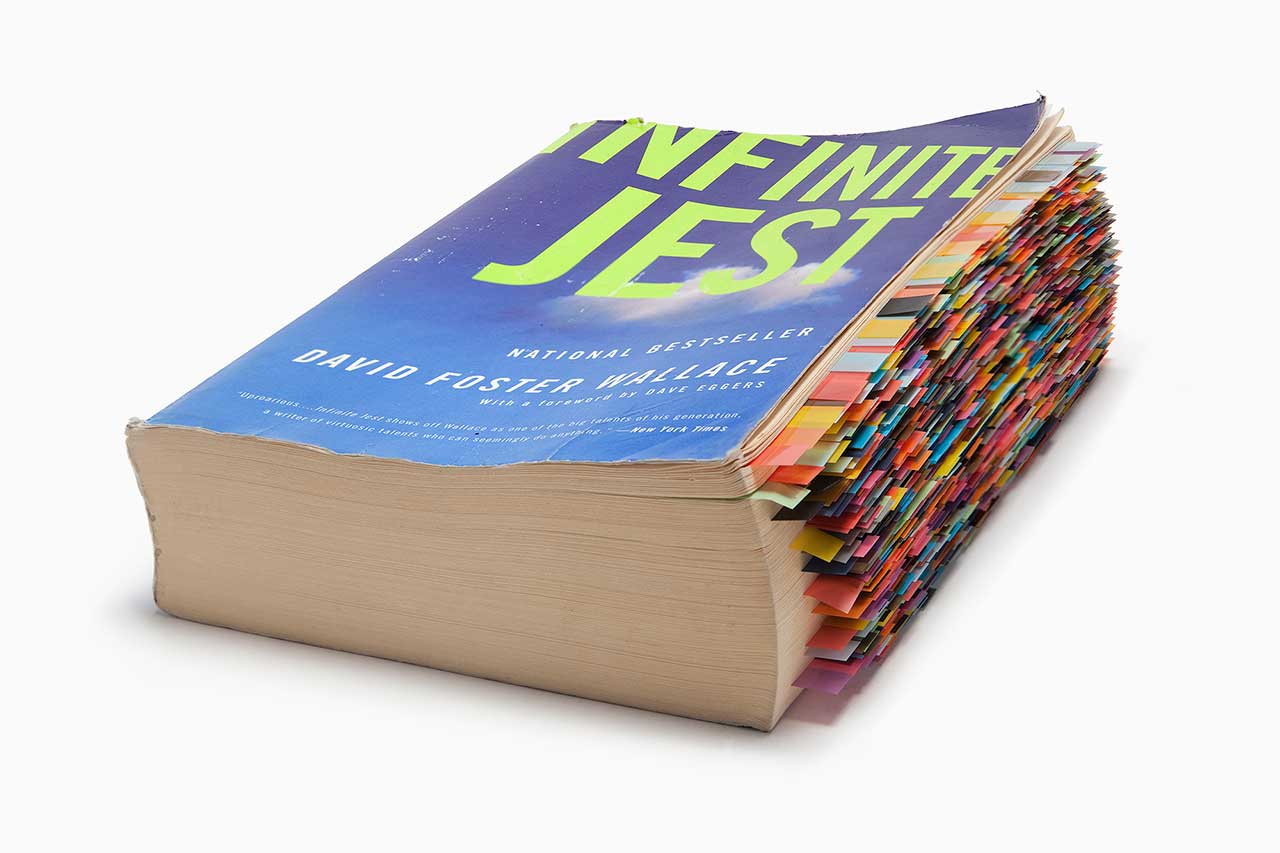 A few years ago I read David Foster Wallace’s A Supposedly Fun Thing I’ll Never Do Again. Because of how much I enjoyed that book, a couple of things happened.

One, I developed a keen appreciation for exhaustive annotation. Wallace uses footnotes extensively in that collection of essays, and in his other works – including his fiction.

It made me fall in love with footnotes. I don’t use them myself so often when I write; how much inspiration to take from those who inspire you is always a tricky negotiation. But sometimes, well, I like to use a good footnote.*

I also discovered that I love Wallace’s writing in general. That’s not so surprising: he’s widely regarded as an offbeat literary genius, perceptive and acerbic, with a wicked sense of humour and a way with sentences.

Wallace has collections of short stories, essays, and three novels (one published posthumously). But one of his works, a novel, is held up as a daunting, difficult, but ultimately rewarding life-changing experience (for those who can manage to finish it).

That novel is Infinite Jest. It’s described by Wikipedia as a “lengthy and complex work”. It also explains that the book “includes 388 endnotes that cap almost a thousand pages of prose, which, together with its detailed fictional world, have led to its categorization as an encyclopedic novel.” Phew!

No doubt about it, Infinite Jest is not something – either physically or figuratively – to be taken lightly.

Having an Infinite Summer

Sadly, David Foster Wallace, committed suicide in 2008, after wrestling with depression for more than twenty years. The following year, I became briefly aware of a social media campaign called #infinitesummer, it was created by writer Matthew Baldwin to rally people who had chosen to read it over that summer.

But that was a few years ago. I never considered joining at the time, but it got lodged in my mind.

Earlier in the spring I supported a Kickstarter campaign named Call Me Ishmael. This project is an innovative way for bibliophiles to share their love of books, using uses voice messages. One of the perks of my reward tier was a tailored book recommendation.

I received that recommendation a few weeks ago, and it was, of course, Infinite Jest. That was all the nudge I needed. OK universe, I replied, I’ll take it on.

I immediately emailed the woman back and said I’d been meaning to read the book, and that this recommendation had settled it. She replied, saying she’d join me. And #infinitesummer2 was born.

We’re now a group of five (two Amsterdam, one London, one Ottawa, and one New York (?) I think). And we’re off to read Infinite Jest this summer. I’ve been reading up on it, researching Foster Wallace, and am ramping up for this.

If you want to join, send me an email, or comment below, and I’ll let you know the plans. #infinitesummer2

* This, for example, is not a great footnote. In fact, it’s completely superfluous.