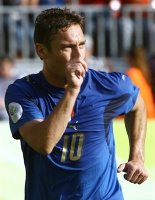 THIS GAME: Drama. My girlfriend cried. But in the good, happy, way. Because it was an emotional game.
Italy won. in the most dramatic fashion possible: a penalty shot in the 94th minute after playing with a man down for almost the entire second half. Now alot of people will tell you that penalty shot call was weak. Those people are either Australia fans, or unbiased observers. But to me, that penalty shot was a legit call.

In the 50th minute the ref flashed the red card at Marco Materazzi, Italy’s resident thug. Materazzi dropped a bad tackle on an Aussie, but his mistimed tackle was in no way redcard worthy. His actions did not warrant Italy to have to play one man short the rest of the game. But in football, you have to go with what you’re given. Italy did. They played a decent game, managing to repel the Australian pressure and even create some counter-attacks of their own. In fact in extra time at the end of the game Fabio Grosso caught a pass as he was streaking up the left side. this is note-worthy already because it wasn’t something he’d managed to do before in this game. Anyway, he took the pass and cut in juked and jammed in the box, causing the australian defender to collapse in amazement. Grosso then tripped over the guy and was awarded a penalty shot.

No not a great penalty shot call, but the Socceroos really have themselves to blame: after having the whole second half to play up by a man, they failed to capitalize. The penalty shot was only an even-up call for the gross advantage given to the ‘Roos earlier. I count the reffing at equal, only Italy made good on their advantage.

But focussing on the refereeing gets away from the true drama of the day: Francesco Totti. That guys a champ.

He didn’t start the game. His play has ben spotty on the international stage, though he’s revered as a demi-god at home. When I say “spotty” I mean he’s been redcarded twice in international tournaments and instrumental in Italy’s recent lack of success in Euro and World Cups, rather than playing a part in their success.

However, he was a late substitution in this game and he made a couple nice touches on the ball.However none of his touches compared to the one he made when he stepped up to the ball in the penalty spot. Totti decided, or was chosen, to be the one on whose shoulders Italy’s hopes of advancement lay. In the 94th minute, staring down the barrel of another half hour of play short a player, Totti stepped to the ball and delivered a booming shot high into the corner of the net. No mistake. Memories of past fuck-ups on the big stage flooded out by the image of him in the replay cracking a little grin. he knew it was now or never. Fame or ignominy. And he FUCKING NAILED IT!

If Italy wins next round though, i’ll honk everything I can.