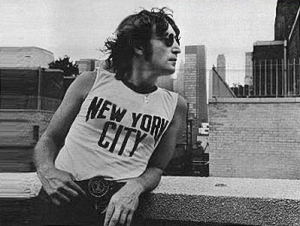 On October 9th 2010 John Lennon would have been 70. Of course, he didn’t live that long. This month there’s a lot of reflecting on the musical genius and cultural icon. What could have been, and what was.

Tomorrow and Thursday, as part of the BFI 54th London Film Fest, there’s Michael Epstein’s LennoNYC – a film about John Lennon’s relationship with the Big Apple.

It sounds like a good movie. Whether you’re going to that premiere or not (tickets for Wednesday have sold out, but there are apparently still seats for Thursday), I recommend watching Dan Bull‘s short song and video Lennononandonandon. Click through for a poignant song title check-a-thon, simply animated.

The animation was done by Dice Productions, and all put together to commemorate the unveiling of a Blue Plaque at 34 Montagu Place in Marlyebone.

If you want a bit more John Lennon animated, and haven’t already, check out I Met the Walrus, the short film about 14-year old Jerry Levitan‘s 1969 interview with John in a Toronto hotel room.