Las Vegas: everything in excess 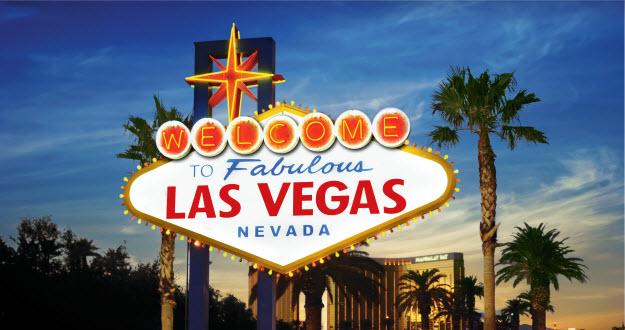 I’ve now been to Vegas. And I get why it’s so popular: it’s wonderful and bright and sleazy; it’s the epicenter of hedonism and indulgence. It can be so damn sexy.

Fortunately, we played it cool. We didn’t lose our shirts or our heads. We passed up fear and loathing in favour of relaxing and wandering. (And watching World Cup football in the hotel room).

But we did partake in what was on offer: winning a very small amount at blackjack and losing a piffling amount of time and money chasing slot machine dreams. But it was fun, which is great because I like fun. But the perimeter of fun and madness really stretches only so far.

We stayed at a hotel/resort/casino thing just two blocks off the Strip. However, anyone who’s been to Vegas knows that ‘two blocks’ in Vegas distance is pretty far. And not just geographically: we saw, in the shadow of neon hot air balloons, and within the rhythmic thump of the rooftop all-day pool bar DJ sets, swarms of cockroaches busily weaving laps around the bushes in front of Bally’s.

Inside the casino it’s tightly controlled and everything smells of alcohol and stale promises. But outside the hotel – yet not even off the property, the filthy underbelly lies exposed to anyone walking on the sidewalk.

And another block away, a friendly homeless guy and his dog were sleeping on the sidewalk in front of a dusty construction site, no doubt soon to be another megamonument to illusions of wealth and fun. 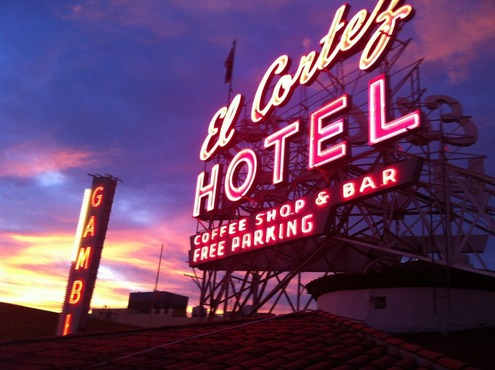 One night out we went to a fairly fancy restaurant called Roy’s, and then had a cocktail at Wynn. We were dressed up and experienced that type of Vegas: gawking at the opulence while trying to buddy up to it, treating ourselves to guilty pleasures, and having a romantic and indulgent evening.

I overheard the valet at Roy’s as we were waiting for a taxi tell another couple to “Keep in mind that every person who works here has to live here.” I thought it was an interesting and quite telling choice of words, saying “has to live here” rather than just “lives here”.

The next evening we stepped away from the Strip and went to Fremont Street to have dinner at El Cortez, an old-school casino where they still reward slot wins with real coins. It has an old cafe inside, that was much more downmarket than we anticipated. I loved it. We had enormous messy veggie burgers and speculated on the clientele. They didn’t seem so much like the stag and hen partiers on the Strip; the circumstances seemed far more mundane and less joyful. And our meal was accompanied by stale cigarette smoke wafting in from the casino. It was both filling and sobering.

But the moment we stepped out onto Fremont Street we were scooped up in the lights and sounds and laughter and costumes once again. And we got carried off on that frisson of excitement for our final night. I genuinely loved our time in Vegas, but realize that the famous facades of that city are really just that.