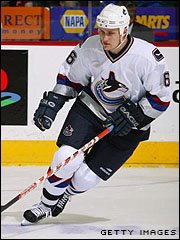 The Canucks have started their new season, with their new awesome goalie and a new work ethic they call “scoring by committee.” In theory this means generating offense from all four lines. What it means in practice is that Sami Salo is scoring most of their goals, either by firing the puck directly into the net, or by bouncing it in off his teammates. That’s a competitor. That’s innovation. That’s true awesomeness.

In the Canucks first game of the regular season Salo shot a puck in off captain Markus Naslunds head, and rifled another shot straight in. Now if you don’t know hockey you might think Naslund perhaps flicked in the puck off his head. But this is hockey, not soccer. The only other person that I know in hockey to have scored a goal with his head is me. When I was 12. I was a very poor hockey player. I played for two years and scored two goals. That’s not great offensive output, especially considering one accidently caroomed in off my helmet.

I thought Salo’s goal off Naslunds head was an accident too, until I read the wrap-up from the Canucks next game. In their 3-2 OT victory over the Columbus Blue Jackets Salo scored another goal, this time bouncing it off Brendan Morrison’s back. Maybe it’s another coincidence, but I don’t think so. I think you’re going to see the mighty Finnish D man score 30 or more goals, but only be credited with assists because the bulk off them will be played in off his team mates, and NHL rules can’t fathom that level of radicality. It borders on genius.