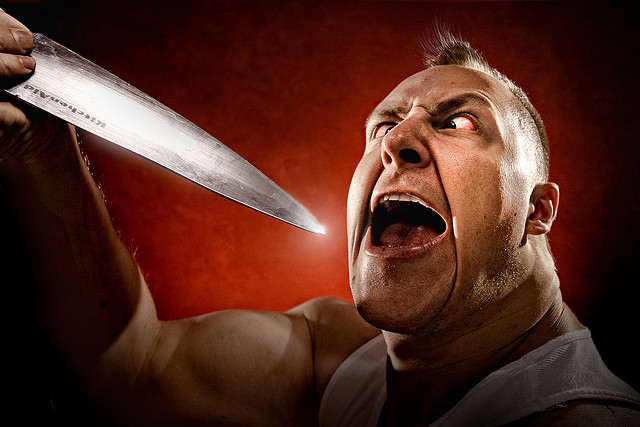 The Edinburgh Fringe experience is known to be a supremely taxing endurance test. In just one short week in the pressure cooker both Dave and I had highlight-reel rants at the unsuspecting.

Dave is one of the mellowest guys I know. He’s also a pretty straight-shooter, as when, at the Meet the Media event, he finished his explanation of our show with the plain-spoken inquiry “Did you even give a fuck about anything I just said?” The critic was apparently taken well aback by his honesty. She did not review our show.

Dave’s willingness to swear at the unsuspecting really hit a high mid-week. During his ‘Manual of Style’ show Conor O’Toole goes through audience-donated flyers and criticizes their font choices. Rob and I were sitting in the front row, and when he asked for some flyers I duly offered him a stack.

After some cutting remarks about a few of the flyers, Conor plucked the Marbles flyer out and mocked the ‘pre-stressed font’, before making some disparaging commments about improv in general.

After the show, while Rob and I were thanking Conor, Dave (who designed our flyers) thundered down from the back row and launched into a brief – but loud and filthy – fuck-filled tirade, before storming off. The last we saw of him was two upraised fingers as he was yanked backwards through the doorway by his girlfriend. There was no lack of commitment on any level.

Rob and I could not stop laughing all the way down the stairs. It was, without question, one of my favorite performances of the festival, cleverly blurring the line between truth, art and anger. I’m still not sure how pissed off he was at the critique, though there’s no question that it provided a great outlet to vent some frustrations.

The very next day I ended up doing, as usual, Roman Around, followed immediately by Marbles. That afternoon Dave, Rob and I battled rap act Sanity Valve, before having a freestyle session with them. Both sessions were on the Royal Mile, and attracted quite a crowd. After that I felt ‘done’ performance-wise. However, I had agreed to be in the improv pub quiz Fingers on Buzzards that evening. My state of mind was ‘fraught’ to the point of ‘almost completely undone’.

The show itself went fine, if not spectacularly, until, as we were walking towards the finish, we made a pitstop at an unscheduled finale.

In the middle of a straightforward and meaningless improv game I interrupted proceedings to shout and swear at the audience for their slipshod and vindictive scoring. I called them all out collectively and then team by team, before threatening to leave with the old comedy chestnut “fuck all a y’all! I’m fucking outta here!” The bit killed, though I suspect it may have been ever-so-slightly terrifying for those of a delicate disposition.

I was gently cajoled back and finished the show without further incident. It may well have been my finest performance of the festival, as I too managed to blur the line between truth, art, and anger.

Afterwards I chalked the moment up to subverting the format of an improv show (which I think was an informed and intelligent choice), coupled with the need for there to be some sort of climax in the hour. But equally as important was the need to let off some steam. Mission accomplished!

Rob did not lose his shit at all during the festival. I think this can be attributed to his character-inspired catchphrase “Spare me,” which he used frequently when he was tired of some bullshit or other. In retrospect there’s no question that it helped him maintain a detached air of equanimity.