Marty McFly and predicting the future

Marty McFly (Michael J. Fox), dismayed by the number of incorrect predictions in Back to the Future II

“Politics is the ability to foretell what is going to happen tomorrow, next week, next month and next year. And to have the ability afterwards to explain why it didn’t happen.”
— Winston Churchill

The first time we really encountered the year 2015 was 1989, when Back to the Future II came out. The future that screenwriters Robert Zemeckis and Bob Gale predicted included, among other things, hoverboards, self-lacing shoes, flying cars and rehydrating pizzas.

These things don’t exist, which some – apparently unsatisfied by the wealth of technological advancements and modern conveniences we do have – see fit to complain about. Others have suggested that whining about a lack of hoverboards while having a computer in your pocket that has access to all of human knowledge, and can connect you instantly with anyone around the globe, seems slightly churlish.

Regardless of whether we’re happy about it or not, the real 2015 is here, and it looks a lot different than what we were led to expect.

STABS IN THE DARK
In their defence, predicting the future is not easy. As a small example, journo Clifford Stoll, in a 1995 Newsweek, wrote “Nicholas Negroponte, director of the MIT Media Lab, predicts that we’ll soon buy books and newspapers straight over the internet. Uh, sure.”

That seems laughably wrong now, with our hindsight sharpened to a fine point. But it’s also a reminder that in 1995, which was twenty years ago, we had no idea what the future of the internet was. Well, certainly Clifford Stoll didn’t. 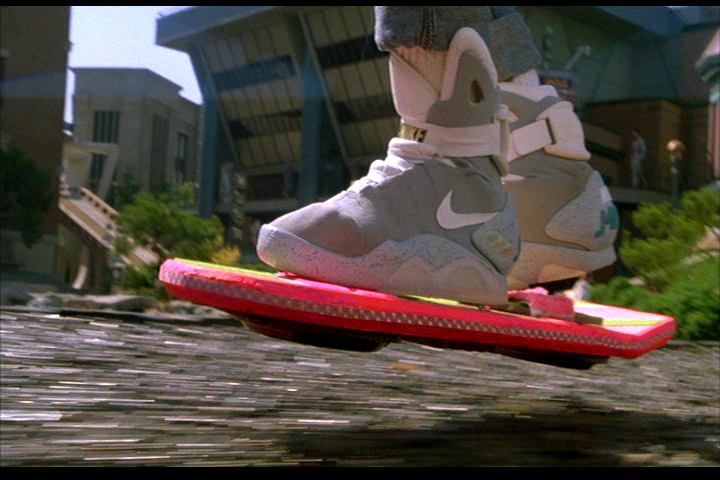 And yet there’s a whole group of people who spend their time attempting to do just that. The Association of Professional Futurists (yes, it’s real) describe a ‘professional futurist’ as “a person who studies the future in order to help people understand, anticipate, prepare for and gain advantage from coming changes.”

And as the future is inescapable, giving careful consideration to how we make adjustments to our present courses of action seems a sensible way to proceed. But still the question remains: where are the damn hoverboards?

THIS IS PROGRESS
The hoverboard question implies that we’ve let ourselves down; that the future we imagined, the one that has since become our present, is somehow less than what we deserve. And it’s not just hoverboards that are the problem: where are the Mars colonies, the rayguns, the robot maids?

Well, just recently, four robotic (and remotely controlled) rovers explored Mars. And last year a comet lander module set down on a meteor as the lander, its space probe, and the icy space rock were all hurtling through the galaxy at speeds of almost 18,000 kph. If that doesn’t impress you, you need to recalibrate your impress-o-meter.

BACK TO BACK TO THE FUTURE
Here’s the big secret: according to director Robert Zemeckis, the 2015 Marty and Doc visit was never meant to be an accurate depiction of the future. “For me… rather than trying to make a scientifically sound prediction that we were probably going to get wrong anyway, we figured, let’s just make it funny.” Screenwriter Bob Gale said, “We knew we weren’t going to have flying cars by the year 2015, but God we had to have those in our movie.”

And perhaps that’s what the Futurists are doing as well – they’re looking at what we have, what people think the future should hold, and attempting to offer us ideas and inspiration to help us imagine our collective future. And in a way, make that imagined future our present reality.

And in some ways, it’s working very well. At least in one potentially ground-breaking way: later this year Nike plans to release trainers similar to the ones worn by 2015 Marty McFly.

Maybe Back to the Future II got it right after all. Only time will tell.