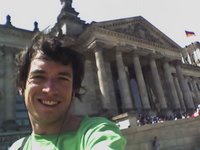 Today was the day I said goodbye to Berlin. It was a sad farewell. But I’m sure to head back one day, however i’ve definitely seen it through rose-coloured glasses, all hot weather bikes, sunshine and of course, 3 World Cup Games a day.

SPAIN-4 0-UKRAINE
Right on Spain. About time to make things happen in a world cup. Big loser here, as is made clear by the 4 nothing thrashing, is Ukraine. I watched this game in a bar by Friendrichstrasse train station so I could make my way to the airport. Only saw the end of the first half. And no goals live.

TUNISIA-2 2-SAUDI ARABIA
Thank Allah for the late late equalizer from Tunisia so that Africa didn’t get skunked in all their first matchdays. Heard the last goal on the bus trundling back to Rome from Ciampino Airport.

GERMANY-1 0-POLAND
What a heartbreaker for the Poles. This game they didn’t suck at all, unlike their first one. Perhaps inspired to bring it to Germany on some sort of “bigger than football” front. However, their backs were broken by the iffy expulsion in the 75th minute. That’s when I actively began cheering for a nil nil draw. But it was not meant to be, Chiara and I watched in horror as German substitute Neuville converted a nice cross into a goal. Looks like POland will be going home early. Fortunately they don’t live very far.