Me and stress: an uneasy relationship 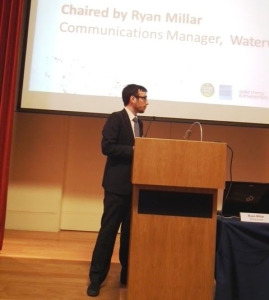 I’ve discovered recently, in the run-up to our just-finished Waterwise Water Efficiency Conference 2012, that I’m prone to stress.

This sucks because
a) stress is bad. And
b) I’ve built up my self-image as supremely self-confident and totally laid-back. It’s the perfect mix; but maybe – I now know – it’s false
Instead, as I’m beginning to realize, I’m a reasonably capable individual who, with applied thinking, hard work and tonnes of support, can make things happen. I guess that’s alright too. But not nearly as superhero-esque as I had imagined myself.

The conference yesterday also coincided with a media launch for World Water Day (which was also my responsibility), so I would say I had been ‘spreading myself rather thin’.

From the three weeks leading up to the conference we had exhibitors and delegates signing up, stuff was being designed, I was writing and sorting the conference programme, liaising with the college, as well as coordinating this media campaign.

It was a stressful time and I was starting to buckle. I managed to realize (with some help from my wife) that i didn’t need to do this all, or assume all the responsibility and stress. So I drafted in help from my colleagues just in time.

And everything went incredibly well. Even considering losing a staff member the day before and a speaker the day of, having wildly disparate lists of attendees, and an overcrowded exhibition.

We had beautiful weather, brilliant facilities, engaging and relevant presentations, and an exhibition crowded with interesting people and products. As far as media interest, another metric of success, we had BBCTV Oxford run a news story, as well as myself and our MD on radio all over the country talking about water efficiency, and our campaign.

However, I slept fitfully Wednesday night, waking up at least three times and grabbing for my phone to check the time. The first time it was about 4:30am – so no I hadn’t overslept, and no I wasn’t sleeping very well. I awoke for the final time to the alarm, with my sleeping shirt drenched in sweat. Chest and lower back cold completely sweated through.

But, when it was all done, people were very pleased because it came off really well.

So what’s the takeaway from this?

Basically, I’m crushing my dayjob. I often think about what I’d actually like to do with my time – like writing and performing theatre and comedy, and making music, working on short stories or making short films, or even doing more journalism/copywriting type things. But I am able to remind myself that when it comes down to it, I like my job and actually according to recent evidence, am pretty good at it.

What does that mean for my other careers, as a gadabout flaneur jack-of-all trades raconteur and specialist in being a dynamic human being – an ideas man full of vim and vigour?

Well, there’s some writing and communications and improv training that I’m developing and delivering. Also, the improv fest that’s set for June (watch this space), and maybe some more freelance work.

Plus I’ve got it in my mind to develop a solo improv show for the summer. And a few other things cooking, so that a year or so from now I’ve got all kinds of shit all hotted up.

And some of that stuff will probably happen, but when I think back on the past couple weeks and all the stress and anxiety, it helps me remember that I’m not some supreme supermensch. I’m just a guy. And so, I will be choosing my projects accordingly (i.e. carefully, with lots of relax time factored in).