Me and Vancouver’s Stanley Cup Fever(s) 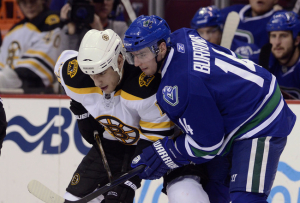 The entire city of Vancouver is gripped by Stanley Cup fever. Raucous celebrations, parades of high-fives, car flags whipping in the west coast breeze – the signs and symptoms are everywhere. The fever has an unshakeable hold on the city and its inhabitants. Or so I’m told.

Too bad I’m in London.

After the emotional rollercoaster of an exorcism that was the Chicago series, the team – led by an heroic Ryan Kesler – ground out a victory against Nashville. And in the conference finals against San Jose, the Canucks seemed to collectively find another gear – from Luongo on out.

And now, just as they’re hitting their stride, they’re in the Stanley Cup Finals. Unlike their last two appearances, this time they’re the favourites.

If EA Sports’ Stanley Cup Finals Simulator is right (as it has been in 13 out of the 14 match-ups so far) this will be a tight seven game series with two overtimes. And at the end of it all, the Vancouver Canucks, in their 40th year in the league, will hoist the cup. The city will go coconuts for weeks.

I wish I could be there to soak up and stoke the revelry.

Instead I will be huddled around my laptop very late at night, or very early in the morning. My sunken eyes fixed unwavering on the screen. I will be irritable and sweaty, with a blanket wrapped around my shuddering frame. I will drink tea and eat biscuits – no chicken wings and Molson Canadian for me. I will be alone. I will cheer silently (so as not to wake my sleeping wife).

It doesn’t sound as fun as the honktastic celebrations that will rule the Vancouver streets. And it’s not, not by a long shot. But it is a playoff fever I call my own.

And, if the symptoms sound suspiciously like actual fever, let’s just say that while we may all be Canucks, we all do it in our own way. 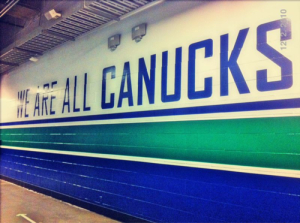