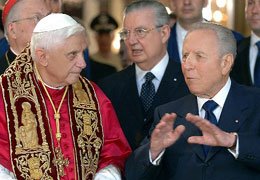 Italy’s very popular president Carlo Ciampi declined to stand for the presidency again. He would’ve been a shoo-in, because he’s so damn lovable, but he was just too old. The guy’s 85. And the Presidency is a seven year term. Do the math. 85 is an alright age for retirement, but 92 seems to be just a wee bit over the hill. Check the photo of him te4lling that spring chicken Papa Ratzinger how it is.

So the elected a new president yesterday. Giorgio Napolitano. Age: 80.

…
This country really struggles for many reasons, one I think we can identify from this situation: being stuck in the past. Napolitano seems like a good choice, he’s a little left wing and an upright guy. Problem is he’s 80 fucking years old!

You want me to believe there’s no respectable politician in this country under the age when most people move into assisted care living? No. There are, it’s just Italy is mired in tradition and deference for seniority. Respect your elders and all that is useful, but at a certain point, oh say 80 years of age, it becomes moot.
Even the Catholic Church (which is a real old guys club) won’t let Cardinals over the age of 80 elect the new Pope.
Granted, Italy has longest life expectancy next to Japan, but come on. I mean seriously, come on.