On watching the game until the end: Juve-Roma 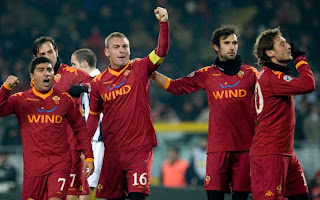 Last night Roma and Juventus played themselves to a draw. At least that’s what I saw.

As I found out later, the end was much more beautiful and joyful than that.

But by the time the game went into extra time, I had acquiesced to my wife’s insistence that we watch something we enjoy together. Instead of football – she may be 100% Roman, but she’s not 1/10 the Romanista I am.

I had ambushed her with the Roma-Juventus game on a Saturday night, and she had responded surprisingly well.

In fact we watched 89 or so minutes of it, with very little complaint. It was a 1-1 draw – not ideal, but an away draw for Roma was not at all a bad result. As a bonus, Totti had scored from the spot to tie the game up in the 66th minute – his first ever goal in Turin against the Old Lady.

When I agreed to switch the feed, Juventus was just sending on a substitute. It seemed as if the two coaches would just run the clock out. I felt I had pushed my luck far enough – why burn the goodwill for a couple of stop-and-start minutes of substitutions and half-hearted hoofing of the ball around the pitch?

This is what I missed, about 88 seconds later:

It was a brilliant sequence, the kind that all football fans watch and hold their breath for. Then celebrate together.

And did you hear that impartial English announcer? He is a pro: he watches a lot of football. Yet he felt a surge of adrenalin in that thrilling moment. You can hear it in his voice.

But for a true measure of the excitement, you need to watch that clip again, with a proper Roman fan calling the play (you will not be disappointed):

Not that Carlo Zampa is known for his restraint, but he shouted GOL!! nineteen times, which is only significant in that it’s a pretty good indication of the jubilation that moment produced for i Romanisti. And no, watching the highlight after the fact is not the same.