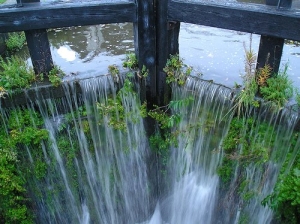 Before any scandal even hits the streets of the internet it’s got a ‘-gate’ tacked onto the end.

Wikipedia has a page dedicated to scandals with the ‘gate’ suffix. David Marsh, editor of the Guardian Style guide wrote a blogpost about the practice last year.

That post was recently invoked when people were attempting to come to grips with the News of the World/News International-led collusion of the Government, the police and the media. Marsh proposed ending the practice, but it didn’t work.

Instead people dithered about what word to attach to the front of ‘-gate’. Would it be known as Hackgate, Everything-gate, or simply Gategate? In the end, they just went with the ho-hum Hackgate.

But how to ‘-gate’ your scandal is really just an issue of taste. There are bigger, more practical concerns.

For one: There will soon be a massive scandal about water. It’s impossible that there won’t be – what with the issue of global water privatization, and the powerful socio-economic forces behind it, and the effects of climate change. The documentary Flow raises some key questions, but not the crucial one: how will we call this scandal?

If we continue using the current system of suffixing, we will be unable to have a handy shorthand for this global water crisis. We’ll either end up with ‘Watergate’ – which, while retro and catchy, would be totally confusing.

Or we’ll be forced to circumvent that confusion by calling it something like ‘Aquagate’, ‘Liquigate’ or ‘Privatizagate’. Stupid and unintuitive, one and all.

A lesser concern, but one which deserves to be raised is: what if there’s another scandal involving the Watergate hotel? It’s certainly possible. Going by current practice that would be known as ‘Watergategate’, which is entirely too unwieldy as a moniker, and much too self-referential. So where do we go from here? Easy.

That’s right. Buck. The trend of a short, hard, single syllable word that can double as a suffix is now long-established. So why don’t we arbitrarily pick a sweet new word, like ‘-buck’. It will save us so much confusion when that water scandal hits. So let’s work on it. Try using it now: Hackbuck or Everythingbuck. Remember Bigotbuck?

Try them on, see how you feel.

It’s only slightly less arbitrary than ‘gate’ – it just popped into my mind. But it works.

As a bonus, check out this picture of a waterbuck.