Pajama Men on a Train 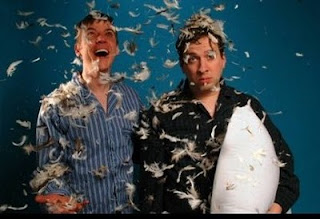 The Pajama Men last is great comedy theatre – which is why I was barely able to procure a solitary leaning post at the back of the Soho Theatre on a Tuesday night during their extended run.

In this show, The Last Stand to Reason, Mark Chavez and Shenoah Allen set out on a train populated by all kinds of strange folks… and drama.

That’s not really what it’s about though. The train journey is a vessel for the PJ Men to riff and romp through characters, scenes and scenarios full of wit, wordplay and awesomeness.

I don’t want to spoil it for you; if you have a chance to see it, you should. Here’s just a taste of what you might expect:

It almost seems like it wouldn’t make sense, but it does. And then some.

Also: it is hysterically funny.