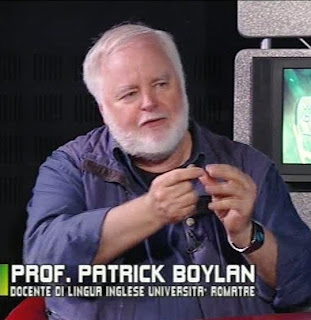 Patrick Boylan is a great professor. I know this because he inspired Chiara to develop her English skills, and she speaks it really well. I often tell people my Italian wife speaks English “better than me.” I’m approximately half joking.

He was an English Professor at Roma Tre, the university Chiara went to. His approach was Intercultural communication. That is probably not what you think it is. It’s more complex, revolutionary and effective than what you think.

Actually, I’m never exactly sure exactly what it is, or how it works myself, but it definitely is effective. His students are some of the very few Italians I’ve met who really understand what it means to be an English speaker. No offense to other Italians, many of whom who have a fine grasp of the language, but English is often taught in Italy by people who seem singularly unqualified to do anything of the sort. This is from personal experience.

As a native English speaker Patrick is of course at an advantage. As a highly respected practitioner of intercultural communication he’s double good. His passion and commitment underscored the whole undertaking. Triple-threat. Unfortunately, he was forced into early retirement.

I met Patrick soon after my arrival in Rome. Chiara took me to meet him – her favourite teacher, a trusted advisor and confidante, and an influential role model. I’m glad she did, because he’s awesome. I liked him immediately. Also, through him I got involved with the U.S. Citizens for Peace & Justice group there. Including some very exciting freeway blogging.

And that’s why he was forced out: besides being a passionate and inspiring teacher, Patrick is an outspoken advocate for justice and equality. He is vocally against arrogant pigheadedness, governmental malfeasance and ignorance.

His tendency to speak frankly about injustice to his students, and use it to stimulate critical thinking, was a constant irritant to the university establishment. They also didn’t appreciate his tireless efforts to reform the way languages are taught in Italian universities.

He taught his students to question what they were told and think for themselves. For a country with a Prime Minister as ridiculously corrupt as Silvio Berlusconi (corruption trial currently pending), who through his position as Prime Minister and his own media empire has free access to about 90% of terrestrial television audiences in the country, media literacy is low on the priority list. Just below political awareness.

A bunch of former students and supporters held an event to honour him yesterday, which I think was a classy thing to do. Chiara really badly wanted to be there. But she’ll get a chance soon.

It’s too bad that more students won’t get a chance to have him as a professor, but the upside is that he’ll have more time to devote to his many many other projects.

In theory, maybe now that he’s retired he’ll be less busy, but somehow I doubt it. You can’t keep a good man down.