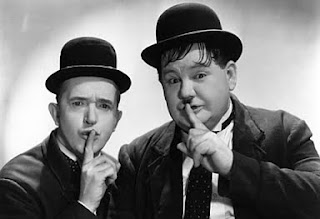 A Brussels Toastmasters club invited me to come and address the group at one of their dinner meetings. They figured I could teach them some improv, and tell some anecdotes, and … well, actually the request was pretty vague. A dinner workshop? A speech with activities? A combination of the two? I was a little stuck.

Until I had a great idea: silence. Public speaking (the raison d’etre of Toastmasters) has a lot to do with words. Often at the expense of the space between the words, which can also be…

So, after a very warm introduction I stood behind the lectern and delivered the longest silence I could manage. I tried not to fill the space with too much eyebrow wiggling and mouth movement. Just silence.

It lasted one minute nine seconds. Just like this.

It was fun and scary. It was also a little off-putting for me, as I’m sure it was for them. I quickly realized I had dug myself a sizable hole before even speaking a single word. Fortunately the discussion it provoked was interesting. There was a useful point buried in the confusion.

We followed it up with some stories and ‘principles shared by improv and public speaking’ before moving into the activities, exercises, games and performances. All done with good humour and high energy. We also had dinner, wine, dessert, and coffee, which though they broke up the flow of the workshoppy aspects, were delicious and gave lots of opportunity for chatting.

I had a great evening, and judging from the feedback, so did they. In fact, I was thanked the next day by the club president in an email for the “formidably edifying and entertaining evening.”

Which is a big step up from the prolonged awkward silence that it began with.