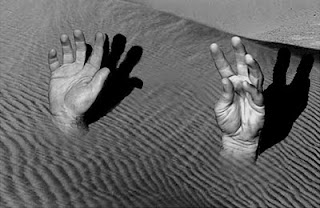 What’s scarier than an amorphous burbling mass that thrives on panic? Probably nothing.

Not even scorpion ninjas.

No doubt about it: quicksand is terrifying. And it loves your panic.

When you’re sinking in quicksand the worst thing you can do is freak out. Or struggle. You’ll just get stuck in deeper. A battle with quicksand is man vs. nature, but also man vs. himself, and his tendency to panic.

Gilligan’s Island, MacGyver, Red Sonja, Dukes of Hazzard, Tarzan, Indiana Jones, the Fall Guy… all were forced to grapple with the hidden menace of quicksand. These battles imprinted themselves on my young mind. I learned to fear and respect the quicksand.

It was lurking in jungles and deserts, heaping danger upon protagonists from beneath. The last thing you needed when pursuing a treasure, or escaping sinister bad guys was to have the very ground beneath your feet give way, and eat you alive.

How could you not panic? The lesson quicksand taught was mastery of self and emotions, and fear of the very ground you walked on. Two very important lessons for an impressionable kid.

But those lessons are obsolete, I guess. Quicksand has disappeared. It’s all slowsand now.

Despite a brief re-appearance in Xena Warrior Princess, quicksand has been tamed. It is no longer something heroic adventurers, kidnapped-scientists’ daughters, or even bad guys have to deal with.

Even the encyclopedic quicksand website hasn’t been updated since 2003.

But I’m not buying it. The fact that comics, movies and adventurers everywhere are ignoring the danger is leading me to be more careful than ever. You should do the same.

Keep your head up. And grab a vine if you fall in – just do it calmly.